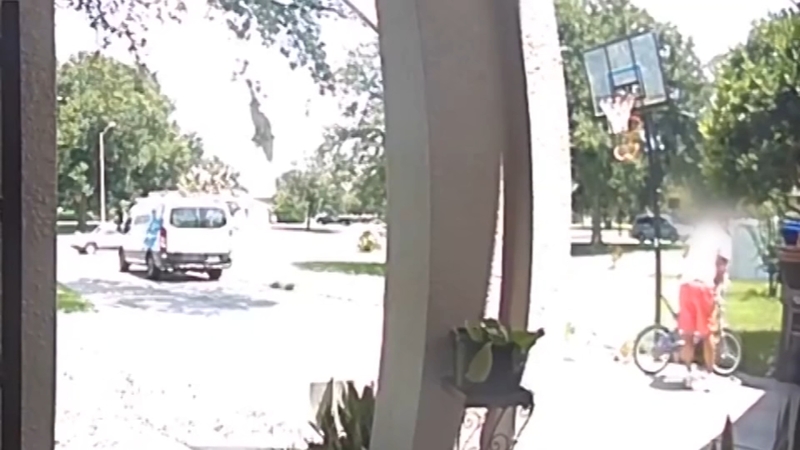 APOPKA, Florida -- Surveillance video from a Ring doorbell camera shows an Amazon delivery driver dropping a package off at a Florida home, but not leaving empty-handed.

The man can be seen putting down the package and then taking a picture to confirm delivery.

This may seem pretty normal, but then you see him walk over to the driveway to check out a girl's bike leaning up against the trash cans. He pulls it out, hops on the seat and rides away on it - going down the driveway and taking the bike.

"I was furious and then after that, I was just, I was almost appalled, that someone would do that," said homeowner, Kristin Casey.

Casey told WESH-TV that she watched it all happen on her Ring app while away from her home. The bike belongs to her 11-year-old daughter.

She called the Orange County Sheriff's Office and Amazon. The sheriff's office told her they have identified the driver and contacted him. He told them he had an excuse for why he took it.

"He believes that the bike being right there by our recycling bin was in fact garbage and that that is why he took that bike," said Casey.

We should note, the garbage cans were close to the house - a long way from the curb.

Even so, all Casey wants is the bike, not for the driver to get put in cuffs.

"I think deep down everybody is good at heart and I believe he is a great person at heart, who made a big mistake," said Casey.

She says the sheriff's office told her the driver has agreed to return the bike. Casey hopes everyone learns from this.

"Hey, watch what's on your front porch, because you don't know what might walk away or ride away," she said.