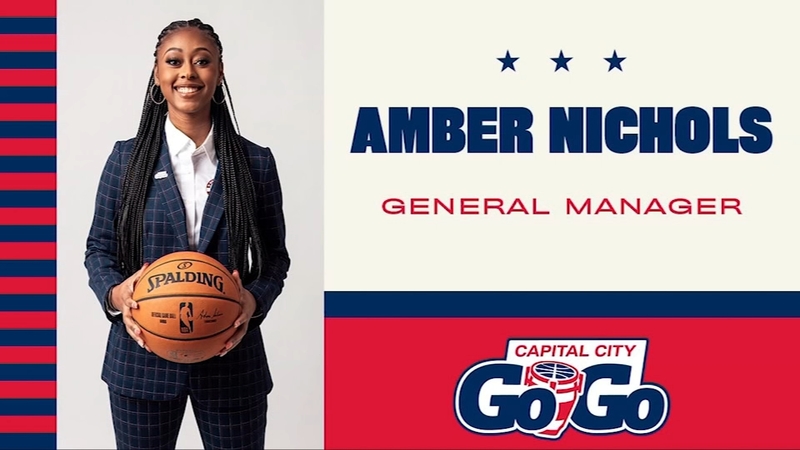 RALEIGH, N.C. (WTVD) -- It wasn't that long ago that Amber Nichols was starring as a high schooler at Broughton. She spent the next few years at Richmond and realized a pro basketball career wasn't in the cards. She also knew in heart that she wanted to stay involved with the game she loves.

That determination has turned her career path into a rocketship ride. Just 28 years old, she was named the General Manager of the Capital City Go Go, the developmental league affiliate of the Washington Wizards. She's just the second woman to ever hold that position in the league.

"I'm OK with inspiring this next wave of young girls, because I was inspired," Nichols said. "I have a lot of female mentors that inspired me to get here, and I think this new trend of women and black women in leadership is just, it's the right time."

Nichols has an infectious positivity, just one of many reasons her post-playing career has taken off.

"I think it's my character and my personality," Nichols said. "I love to get along with people of all walks of life, and I'm a student of the game, so I love learning from people."

Nichols impressed from the minute she was brought on board as an intern by Washington, the only woman by the way. It's her work ethic and Raleigh-born grit she'll rely on in her new job.

"It definitely gave me a very tough-minded mentality and a mentality that helps me overcome any type of adversity I've ever faced, and that's what Raleigh means to me," Nichols said.

As for having the respect of the players, Nichols says game respects game. They know she knows basketball inside and out.

It seems likely that Amber will have a shot at running an NBA franchise at some point down the road. That's the future though. Right now, she's living in the immediate.

"Sometimes there's a little bit of imposter syndrome there. Just being in this position, being so young, but at the same time I'm very confident you know?" she said. "I spoke this into existence a couple years ago, and I kept the vision in my head and that's what motivated me to be here and I've done the work, I've put the work in."
Report a correction or typo
Related topics:
sportsraleighwashington d.c.nbasportswomen of distinctionwomen
Copyright © 2021 WTVD-TV. All Rights Reserved.
TOP STORIES
Mark Meadows to halt cooperation with January 6 committee
Amber Alert issued for 1-year-old Randolph County girl
Everyone should get tested prior to indoor gatherings, CDC says
Toyota to build lithium battery plant in NC
50 mutations in omicron could be its downfall, data shows
Why feds are warning it could take months to get a passport
Show More
Raleigh Police plan to crack down on speeding drivers
This day in history: Pearl Harbor attacked
CEO of American Airlines retiring
Durham, Zebulon make political history with new mayors
NC unemployment improving but businesses still struggle to hire
More TOP STORIES News