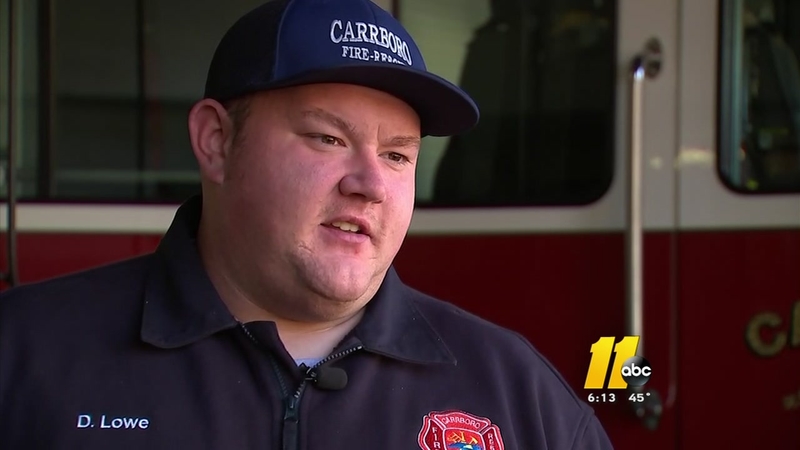 After being evacuated from her home in Lake Lure for seven days, Shannon Wilson returned to find her American flag tucked safely behind the storm door on her front porch. She shared a photo of it on ABC affiliate WLOS' Facebook page describing what happened and thanking the firefighters.

Dylan Lowe, a firefighter with the Carrboro Fire Dept. was among those who helped protect Wilson's home and flag that day.

"The flag was always explained to me as something that's just to be protected," Lowe said.

Lowe deployed with three of his fellow Carrboro firefighters on Nov. 11 to fight the wildfires spreading in the west.

While cutting fire lines in Wilson's neighborhood, Lowe said he and other firefighters from Shelby and Jacksonville spotted Old Glory flying. They took down the flag, rolled it up, and placed it behind the glass door.

"Firefighter (Victor) Salazar from Jacksonville is former military," Lowe said. "He was a marine. So he had strong feelings about it as well, and I'm a patriot. I love this country. I love everything about it. I love where I live. That flag gives me goosebumps every time I look at it."

Lowe said within hours, the NC Forest Service was back burning around Wilson's neighborhood, trying to keep the fire from spreading. Fortunately, he said, the flames never reached her house. But if they did, "Worst case scenario, the home was to catch on fire, the flag wouldn't be seen burnt," he said.

"They just did what they thought was right," said Kent Squires, Carrboro Deputy Fire Chief.

Chief Mike Yaniero, Dir. of Public Safety for the City of Jacksonville, praised Salazar and the other firefighters who served on that deployment: Capt. Kevin Davis, Bert Riegelsperger, and Eron Ferrell.

"This is indicative of the quality of our Jacksonville Fire and Emergency Services Firefighters," Yaniero said in a statement to ABC11. "They are very compassionate in what they do."

Wilson's Facebook post has been shared thousands of times, with people expressing their gratitude for what all the firefighters are doing to contain the wildfires in Western NC.

"I had no idea when we were all doing that, it would turn into something this big and really touch someone like it did," said Lowe. "You look at the American flag and it's really the one thing that unifies all of us."