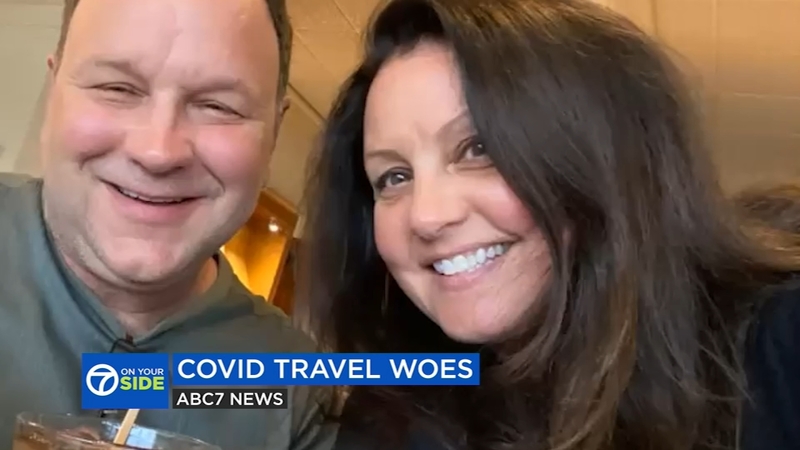 Americans arrested for trying to board flight in Switzerland

SAN FRANCISCO -- COVID travel restrictions are slowly easing up, but rules keep changing and vary from one place to the next. So when a California couple booked a trip to Greece, they had no idea of the nightmare ahead.

Greece had lifted travel restrictions and this couple had all the documents Greece requires. But the trip unraveled when they tried to connect to their flight in Switzerland. They were stopped at the gate and worse, the police came and arrested them.

"I was shocked. I thought it was some kind of a joke, like we'd be able to just explain to them..." said Cindy Miller. She and her friend Brett were headed for a three week tour of Greece.

"I'd always wanted to go there since I was a kid," Miller said. "We haven't taken a trip for 18 months because of COVID."

"The passport control guy says, 'You can't come in.' I'm like, 'What do you mean we can't come in? There's my gate, my flight is leaving in two hours.' That's when the whole thing happened. He took our passports, he called the police. The police came full on, police with guns... took us into the basement which is a police station..." she said.

Swiss police said their gate technically was inside Switzerland... and Americans were banned from Switzerland because of COVID-19. They'd have to be deported - all the way back to California.

"They showed us deportation papers, I'm crying... they put us in this area that had bunk beds with mixed men and women. They said, 'Here if you need to buy a toothbrush... here's where you're gonna sleep for the next day.' I'm like no! I'm not gonna sleep with all these men," Miller said.

They sat up all night, along with other travelers also booted from their flights.

"I think I was in a state of shock. There I was, in the basement surrounded by police with giant rifles and nobody cares one bit about our situation," she said.

They didn't give up on their Greek vacation, persuading police to deport them only as far as New York.

"So we get back on the plane the next day, still haven't changed our clothes, all the way back across the Atlantic to New York City, purchased a hotel..." Miller explained.

Then, a text from Swiss Air. Their luggage never made the flight.

"So I just burst into tears again... now I'm thinking 'Oh my God, I have to go run to Target and buy some underwear and like a bra... And my friend said you know what, let's just go to baggage claim. And our bags were there! We were jumping up and down and hugging in the baggage claim," she said.

The couple got a flight from New York direct to Athens, finally joining the tour, worn but happy.

"Our real first feeling of vacation was flying into Mykonos. It was beautiful, absolutely beautiful," Miller said.

Miller blamed Swiss Air for booking them on a flight they could not take. "Swiss Airlines is aware... they're not only selling these tickets, they're allowing people to fly across the Atlantic only to be deported... I was incensed."

The definition of what qualifies for a refund these days seems to be constantly changing. Here's what travelers need to know.

Our sister station KGO-TV pointed out Americans were barred from entry, no matter the documents. And the airline did agree to refund $3,400 for extra costs.

"I was pretty happy to at least get a portion of our expenses back. That's all thanks to you guys," said Miller.

KGO-TV contacted the Swiss consulate, which said those travel restrictions for Americans have since been lifted.