A family nightmare as NC pastor held in Turkish prison 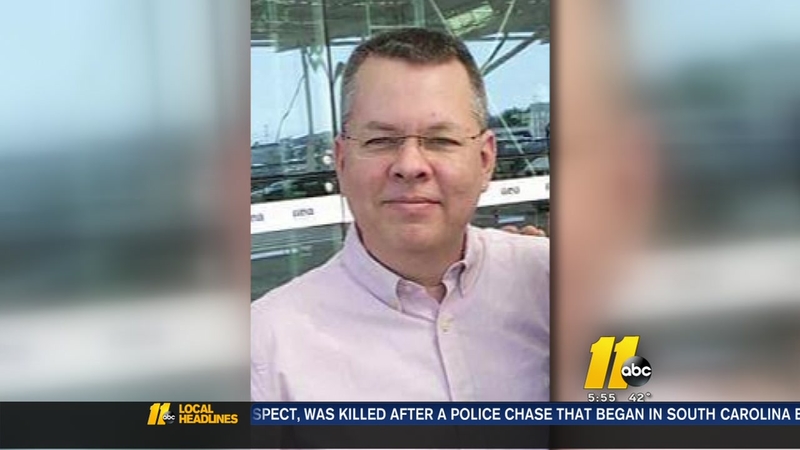 Pastor Andrew Brunson is being accused of "membership in an armed terrorist organization." His family says he's being persecuted for his Christian belief.

Andrew Brunson and his family are from Black Mountain, in western NC, and his daughter Jacqueline is a student at UNC Chapel Hill. The pastor has dedicated 23 years to Christian missionary work in Turkey -- building churches and spreading the gospel -- until he applied for residency and was arrested.

When asked if her father might be involved in any terroristic activity, Jacqueline Brunson said "not at all, definitely not."

ABC11 spoke via Skype with the organization helping to defend Brunson, the American Center for Law and Justice, and they agree.

"There's nothing that they can look at that has any ties to membership and any terrorist organization. He's the pastor of a church," said executive counsel Cece Heil.

A coup sent Turkey into a state of emergency last summer, and according to the ACLJ, that's made things more difficult because the case has been sealed, no court date is set, and the official charges and evidence are unknown.

"Turkey's been going through a lot of changes recently and Christians are not as welcomed," Jacqueline said.

American Center for Law and Justice and the Brunson family have started an online petition for support.

Now they're putting their faith in the hands of politicians

"We are hopeful that President Trump, if he has the chance to speak with President Erdogan, he'll raise this issue with them," Heil said.

Both North Carolina senators, Richard Burr and Thom Tillis tell us they're aware and working to get answers.

From the office of Senator Burr:

"Sen. Burr is aware of this case and his office has been in touch with appropriate authorities."

From the office of Senator Tillis:

"Senator Tillis and his staff have been engaged in the effort to free Pastor Brunson, who is being wrongly imprisoned. We have been in close contact with the State Department, the Senate Foreign Relations Committee, and members of Mr. Brunson's family, and there are ongoing diplomatic efforts to bring Pastor Brunson home."

In the meantime, Jacqueline is praying and putting off her upcoming wedding.

"That's kind of on hold because I want my dad to be able to walk me down the aisle," she said. "I want him there. He only gets to see me get married once."