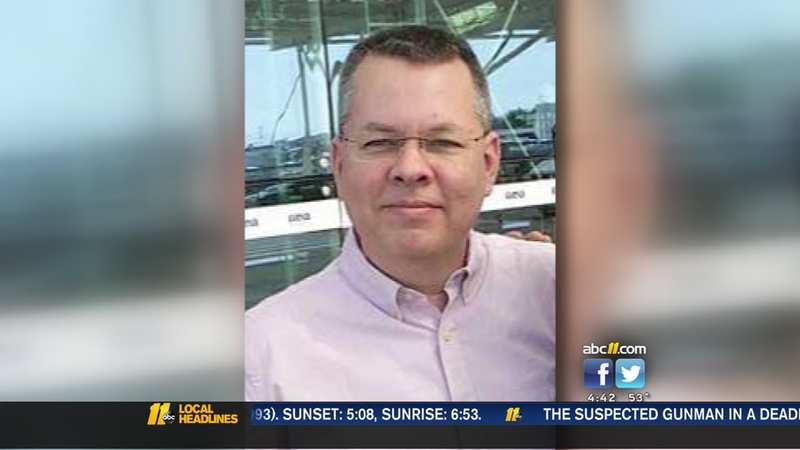 RALEIGH (WTVD) -- Senator Thom Tillis said he's working to help free a North Carolina, Christian pastor who has been held in Turkey since 2016.

Andrew Brunson spent over a year in a Turkish prison, and while the country's president has proposed a prisoner trade, Tillis said it would be an injustice.

He led a committee hearing on Brunson, and the detention of other American citizens on Wednesday, and told ABC11:

"As of today, Andrew Brunson has spent 404 days in a Turkish jail without trial and without access to the evidence against him. He is the subject of a vicious smear campaign in the Turkish press and facing life in prison on fabricated charges of being a terrorist and coup-plotter. It is clear President Erdogan is holding Andrew Brunson ransom and the United States should not expect - much less accept - this sort of treatment from a NATO ally. I will continue to work with the State Department and my colleagues in Congress to secure the release of Andrew so he can return to the United States as a free man."

Brunson is accused of being a "threat to national security," after a coup that erupted in Turkey last year, and was has hit with new accusations like "military espionage" this August.

His daughter Jacqueline Funari said he's an innocent man who was trying to spread the gospel there for over 23 years.

"My father is not an armed terrorist trying to throw any government," Funari said during the committee hearing. "My dad is a pastor who went to Wheaton College, then onto seminary, and got a PhD in New Testament."

"No one has seen any evidence," Cece Heil said at the hearing, who is with the American Center for Law and Justice and is representing Brunson. "And he has not been charged with any crime. He still simply a suspect."

While Brunson's fate is still unknown, others in the Triangle share his prayer.

While Jacqueline Funari is legally married, she still holding out hope that one day her father will walk her down the aisle.

ABC11 has decided to slowly reduce the number of stories on the website that have a comments section. We believe very strongly that our audience should have an opportunity to discuss and debate events in our world, however, we have not been able to moderate the comments as well as we would like. Instead of hosting a platform that could allow a few loud and ugly voices to dominate a conversation, we want to encourage everyone to join us on our social media platforms and speak out there. Facebook: facebook.com/ABC11 Twitter: twitter.com/ABC11_WTVD
Report a correction or typo
Related topics:
religion & spiritualitychapel hillreligionu.s. & worldprisonturkey
Copyright © 2022 WTVD-TV. All Rights Reserved.
TOP STORIES
Heaviest snow shifts west, dusting to 2'' likely in Triangle
Former NCSU footballer Torry Holt named to NC Sports Hall of Fame
Biden confirms he will nominate first Black woman to SCOTUS
Change being made to Holocaust curriculum in NC public schools
Frigid temperatures leave Durham families in the cold
LATEST: N95 masks expected to arrive at CVS, Walgreens
Here's why thousands of NC employees still are not working
Show More
Brazen burglary of Raleigh shoe store caught on camera
Family of murder victim hopes billboard leads to arrest in case
Toddler credited with saving family of 7 from devastating house fire
Navy discharges 23 sailors for refusing COVID-19 vaccine
Chiefs fans donate $178K to NY children's hospital after beating Bills
More TOP STORIES News