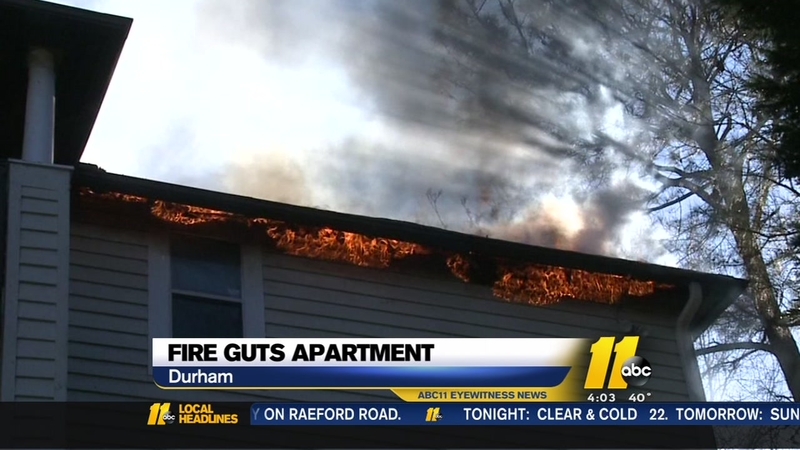 DURHAM (WTVD) -- The call came into the Durham Fire Department at 10:52 a.m., on Friday morning. Smoke was billowing out of a third-floor apartment in the Arium Pinnacle Ridge complex off University Drive.

By 11:15 a.m., dozens of firefighters were there, and the blaze had gone from smoke in the attic to a full-blown inferno. Flames gutted the top apartment at 3611 University Drive as firefighters struggled to keep them from spreading to neighboring units.

The two-alarm fire brought a massive response by the Fire Department.

"We had initially five engines and two ladders and two battalion chiefs, said Durham Fire Chief Willie Hall. "Then they upgraded that and got two additional ladders and some more engines. So, a big response for us."

Hall said the fire took on a new ferocity when it got into the attic and was whipped up by wind coming in from the outside.

"In this particular case," he said, "the wind is going from right to left and the fire started on the right-hand side of the building. So it can move through the attic rapidly and then we've got to worry about the buildings that are just a few feet away as well."

One reason Hall thinks the fire was so large was that it had a head start.

"This building is kind of off the road. It's tucked away here in a cul-du-sac, so there's not a lot of high traffic to see it until it breaks through," he said. "A lot of times in the middle of the day, a fire will go unnoticed unless there are stay-at-home parents who can catch it early enough."

The third-floor roof collapsed. There was also heavy smoke and water damage to apartments on the third floor and second floor apartments incurred some water damage.

The Durham Fire Department determined that the fire was accidentally started.

It was caused by ashes from a fireplace that were disposed of improperly.

There were 11 occupied units in the building. There were no reported injuries.

"We just heard this banging on the door," he said. "We'd never seen him before. He just said, 'The building's on fire,' we smelled smoke at that point, and I got my roommate and we got out. We thought it was going to burn to the ground, honestly. In my lifetime, I've never seen anything like this."

The Red Cross was on scene and at the ready to work with families displaced by the fire but the organization's help went unneeded. Chief Hall says everyone who needed help found it in friends or family.

Hall had a number of recommendations as to how to prevent something like this from happening in your home.

The Durham Fire Department has some safety tips in the wake of Friday's apartment fire.

"We want people to stay safe this time of year especially," he said. "You know, make sure they've got working smoke detectors. If they're going to have a fire in the fireplace, that they have a chimney sweep come out and inspect the fireplace to make sure it's even safe to burn in."

"People have a tendency to light candles because they smell good and create ambiance. We try to discourage as much use of candles as possible and make sure that if you light one you put it out."

A big problem, Hall said, is that some people will try just about anything to keep warm in the winter.

"People use anything they can. You know, we've had people that have gotten carbon monoxide poisoning because they'll use charcoal and put a little bit in a pot and light it to get some warmth off it. They'll burn scrap material. They'll burn paper, cardboard. And there's so many byproducts put off from all these materials now that the respiratory difficulties and the death that can result from that is really dangerous. So we discourage that as much as possible. There are plenty of homeless shelters that are available and people should use those if they're out in the cold."