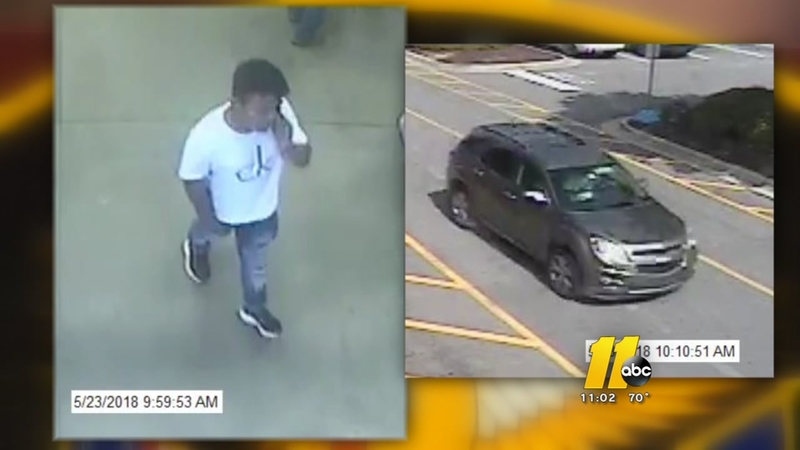 APEX, N.C. (WTVD) -- Apex police are looking for a man who stole a woman's vehicle and wallet in the parking lot of the Beaver Creek Commons Target Wednesday morning.

It happened just after 10 a.m. and could have turned out even worse - the 37-year-old woman was trying to strap her baby in a car seat when the incident happened.

Apex police searching for suspect in robbery and carjacking

"She did not try and intervene," Letteney continued. "She did the best possible, which is care for her child. She made sure she and her child were safe. The car can be replaced, wallet can be replaced."

The man approached the woman in the parking lot and took her wallet and 2010 Chevy Equinox at gunpoint, police said.

"It is a rare occurrence," Letteney said. "Apex has a historically low crime rate, however when we have an incident like this, it certainly is a concern and there is a victim involved here."

Shoppers were surprised by the brazen daylight crime.

Apex is "just like it always has been, small-town USA," said Allyson Stewart. "You know your neighbors, you ask them to let your dog out, whatever, I would never have thought that to happen here."

Anna Schlosser, another shopper told ABC11 it seemed the victim handled the incident about as well as possible.

Apex police have just released surveillance pics of the suspect and the victim’s car. The last pic is a stock photo of a similar vehicle. #ABC11 Details here: https://t.co/HiAtxirNeO pic.twitter.com/C1cuUsHgdt

"Unbelievable. I can't imagine coming out and seeing that happen," Stewart said.
The suspect is described as being a short, possibly Hispanic male. He was between the ages of 18 and 30 years old and had acne scarring on his face.

He was wearing a white T-shirt, blue jeans, and dark sneakers.

Police say he was seen a short time earlier inside the Lowe's Home Improvement store prior to the carjacking.

"The best thing to do certainly is be aware," Letteney said. "Be aware of your surroundings. If you see something unusual, call the police. If it's in the evening, park in a well-lit area, park closer to the store rather than in an outlying area of the lot."
Report a correction or typo
Related topics:
apexrobberystolen carcarjackingtarget
Copyright © 2022 WTVD-TV. All Rights Reserved.
TOP STORIES
Court papers show how investigators linked suspect in Hedgepeth murder
Supreme Court to hear challenge to race in college admissions
George Floyd's family reacts as civil rights trial begins
Eateries hope for community support during Triangle Restaurant Week
No charges for Johnston County deputy who shot drug suspect in wrist
Mental health providers of color see influx of patients
LATEST: Next steps in fight against COVID-19
Show More
Getting paid on Venmo or Cash App? New tax rule might apply to you
Alex Murdaugh hit with more charges connected to 4 new clients
8,500 troops placed on heightened alert for European deployment
Cruise ship takes passengers to Bahamas to avoid Florida warrant
Defense: Chauvin called 'all of the shots' when Floyd killed
More TOP STORIES News