According to data released by the NC Employment Security Friday, the rate decreased from 11.2 in February to 11.1 in March.

"North Carolina gained 3,300 jobs in March," said ESC Chairman Lynn Holmes. "Manufacturing and Construction both had small gains in the month. But, we need to see a more consistent pattern of growth in our job sectors in the coming months before we can be sure this is a sign of sustained growth."

There were nearly 2,800 fewer people on the unemployment rolls. An additional 18,000 have jobs, meaning that in the past year the number of people getting a non-farm paycheck increased by more than 61,000.

Holmes says despite the good signs it's too early to know if the March data are evidence of sustained economic growth.

The next unemployment update is scheduled for Friday, April 23, when the county unemployment rates for the month of February will be released.

Click here for a detailed report of March's statistics. 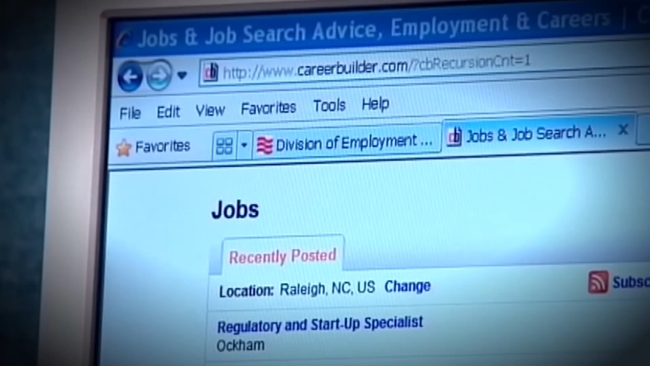 What the NC unemployment office says it's doing to process claims
NC gets better at social distancing in days after Stay-at-Home order
Duke makes 3D-printed face shields for Duke Health, UNC Health
DPS, JPS to end meal distribution amid COVID-19 virus
102-year-old man tests negative, beating COVID-19
Show More
Some in US may not get stimulus checks until August. Here's why.
FPD searches for 2 people of interest after shooting at store
How to tell the difference between coronavirus and allergies
Google data shows how social distancing has changed our habits in NC
Legendary singer Bill Withers dies at 81
More TOP STORIES News