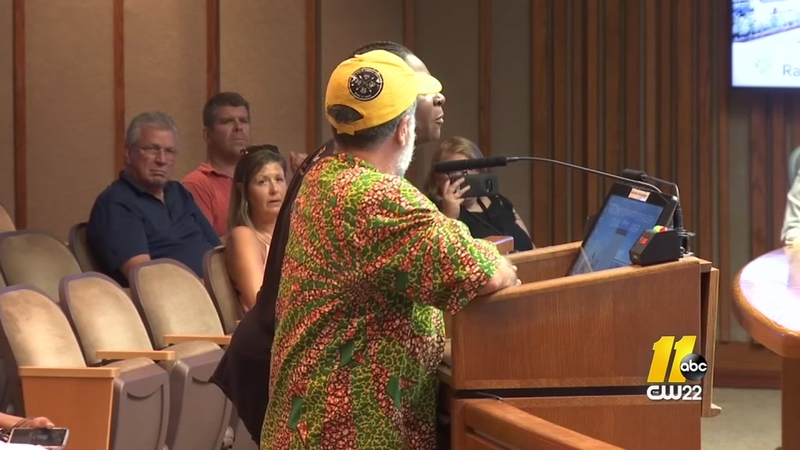 RALEIGH, NC (WTVD) -- Emotions boiled over inside Raleigh City Council chambers Tuesday night as city leaders heard from frustrated residents who said they believe their demands for more police oversight are being ignored.

"Listen to us!" screamed Rolanda Byrd as she tearfully told off the mayor of Raleigh about what she sees as the city's failure to act on the issue of police accountability.

It's been nearly three years since Byrd's son, Akiel Denkins, was shot and killed by a Raleigh police officer in the city's southeast section.

The shooting was ruled justified. But since then Byrd and community activists have launched a city-wide campaign to end what they argue is a systemic excessive use of force by local law enforcement.

Justice Served NC wants a 'place at the table'
Supporters of Justice Served N.C., Inc. are planning to show up at the Raleigh City Council meeting Tuesday asking for police oversight.

One by one, advocates made fresh demands to city councilors.

"The people of Raleigh deserve a community oversight board with investigatory power, disciplinary power, and with subpoena power," said each of the speakers.

Frederick Hall was in the crowd as well Tuesday. It's been less than a month since his violent confrontation with Raleigh Police in the middle of Garner Road. Hall is charged with assault. His family and activists contend his case proves the need for more officer training for dealing with the mentally ill.


Hall's case along with Kyron Hinton's beating at the hands of state troopers and Wake County deputies are the most recent flashpoints in the ongoing discussion of frayed relations between Raleigh's black community and law enforcement.
The tense back and forth inside Tuesday's city council meeting was further proof of just how fresh the wounds still are.

"What will it take for the city of Raleigh to value black lives?" -- Raleigh activists and advocates flood city council to demand increased police accountability. #abc11 pic.twitter.com/jQPVVEvzHU

"There are many, many community issues that lead to all of the things we're talking about. We have to continue to address them as a community," McFarlane said.