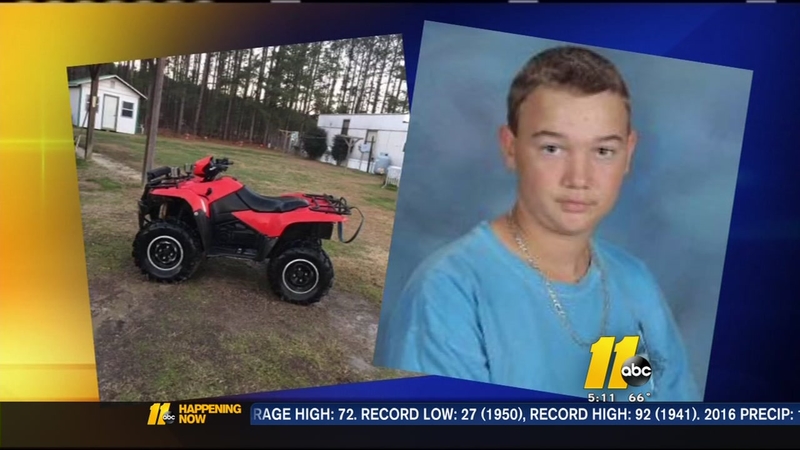 12-year-old Ben Stafford died Thursday night doing what he loved: riding his ATV. According to state troopers, his father went looking for him when he didn't come home Thursday night and found him dead near a creek just off McNeil Mill Road.

"Everyone was kind of a mess because he had so many friends in the class," said Autumn Harrington, also a seventh-grader at Western Harnett Middle School. Harrington was in the classroom next to Stafford's and said he was one of the school favorites.

"He could always make everyone smile and he worked hard to do that. And he had a very thick accent and that could also make everyone smile. And if people made fun of him about it, he just kind of shrugged it off. He was friends with a lot of people because he was a friendly person, and like I said, he made everyone smile."

Autumn said she'll remember her friend in the same glowing way others will: funny with a thick accent and a love for sports, his four-wheeler, and camouflage.

"He wore camo like every day," Autumn said. "He loved hunting and, in fact, going on his ATV was his favorite thing to do."

But Ben wasn't wearing a helmet when he died, according to the Highway Patrol. That's against the law in North Carolina. It's also embedded in state code that, because he was younger than 16, he had to have an adult with him.

If his parents knew he was riding without a helmet on and adult present, they could face charges. In this case, a spokesman for the Highway Patrol reports the District Attorney in Harnett County won't file any.

Back at Western Harnett Middle, though, Stafford's friends say the fact he wasn't wearing a helmet is being talked about and may make a difference in another young life.

"It's making people do a double take," Autumn said, "like, what if that happened to me and I wasn't wearing a helmet and I died like that?"