Austin Police: Latest explosion not linked to previous ones 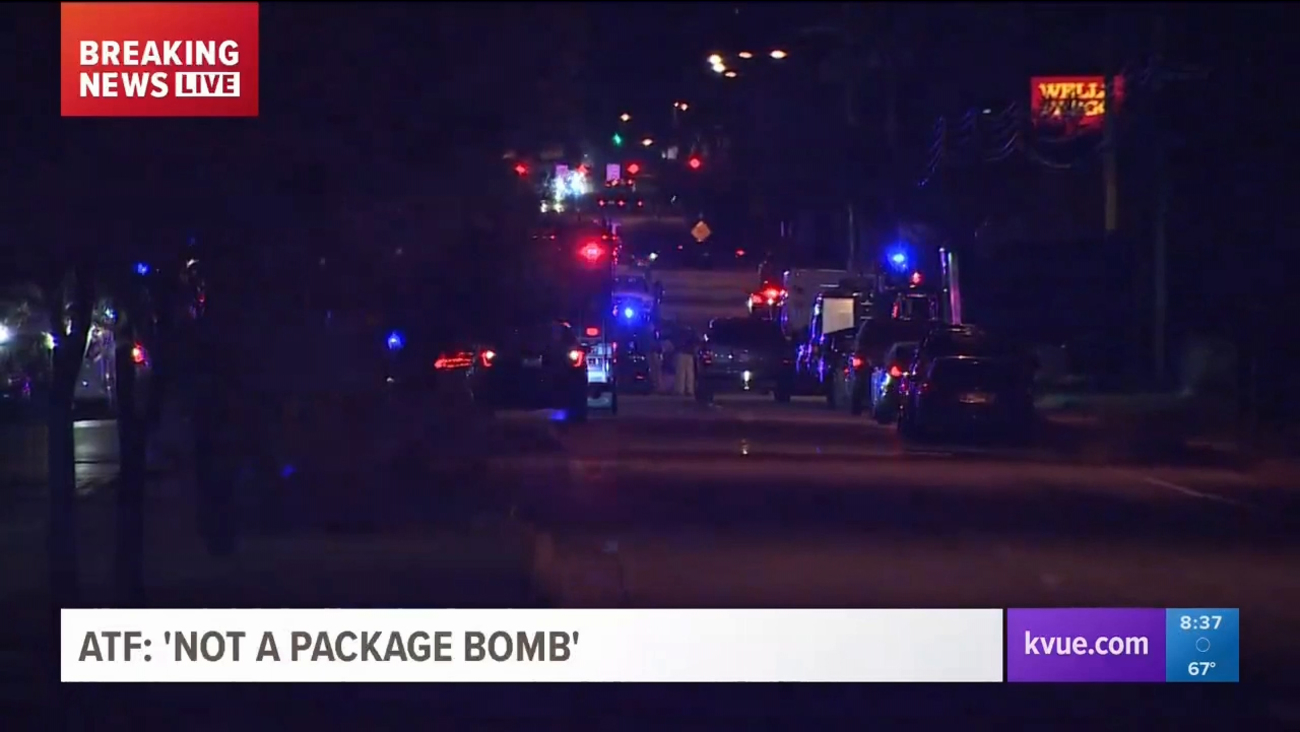 AUSTIN, Texas -- Investigators pursuing a suspected serial bomber in the Texas capital faced new threats along with the promise of valuable new leads as their attention shifted Tuesday to a FedEx shipping center near San Antonio where a package exploded and the discovery of another, unexploded bomb near Austin's airport.

Even as they pored through surveillance video footage and collected evidence hoping to get closer to tracking down whoever is behind the blasts that have killed two people and seriously wounded four others, a Tuesday night scare caused them to swiftly respond to a Goodwill store in the southern part of Austin. It turned out to be an unrelated explosion: Someone dropped off a device sometimes used in military training and it went off and injured a worker.

Police said they don't believe it was the work of a copycat and that such military items are sometimes mistakenly donated to Goodwill instead of being properly disposed of.

BREAKING: ATF responded to a reported incident in the 9800 block of Brodie Lane, Austin. It was not a package bomb. An incendiary device was located, one injured. At this time, it does not appear to be related to the #packagebombmurders. pic.twitter.com/bEuskJm0Ii

"We put all the donations we get in a big cardboard box. (The worker) pulled something out in a bag, completely normal, and the device went off," Gary Davis, president and CEO of Goodwill Texas, said as he stood outside a police barrier huddling with other employees.

"In this town, if an incendiary device goes off, everybody just scatters and panics. We're all on edge."

The blast reminded Shahla Mohnandshaw, who grew up in Afghanistan before moving to the U.S. in 2012, of home. Mohnandshaw, whose husband works at the Goodwill, was doing laundry at her apartment complex nearby when she heard helicopters and raced toward the store.

"I was raised on these bombings. I know the feeling of how it feels and how it hurts," she said, adding that she used to tell people "in America, there will never be these things."

Even before the report of the Goodwill scare, it had been a busy day. A bomb inside a package exploded around 1 a.m. Tuesday as it passed along a conveyer belt at a FedEx shipping center in Schertz, northeast of San Antonio and about 60 miles (95 kilometers) southwest of Austin. One worker reported ringing in her ears and was treated at the scene.

Local and federal authorities confirmed the package center blast was related to four other ones since March 2.

Later in the morning, police sent a bomb squad to a FedEx facility outside the Austin airport to check on a suspicious package that was reported. Federal agencies and police later said that package had indeed contained an explosive that was successfully intercepted and that it, too, was tied to the other bombings.

Authorities also closed off an Austin-area FedEx store where they believe the bomb that exploded was shipped to the distribution center. They roped off a large area around the shopping center in the enclave of Sunset Valley and were collecting evidence, including surveillance camera footage.

U.S. Rep. Michael McCaul, a Republican from Austin who is chairman of the House Homeland Security Committee, said that investigators have obtained surveillance videos that "could possibly" show a suspect, but are still poring through video.

"I hope his biggest mistake was going through FedEx," McCaul, who has spoken to federal investigators and Austin police Chief Brian Manley, said of the bomber in a phone interview.

He added that the person responsible for the bombings had previously been "very sophisticated in going around surveillance cameras."

"They've got a couple of videos that could possibly be the person but they're not sure at this point," McCaul said.

Before it exploded, the package had been sent from Austin and was addressed to a home in Austin, Texas Attorney General Ken Paxton said.

In a statement, FedEx officials said the same person responsible for sending the package also shipped a second parcel that has been secured and turned over to law enforcement. A company spokeswoman refused to say if that second package might have been linked to the one reported at the distribution center near the airport.

The Schertz blast came less than two days after a bombing wounded two men Sunday night in a quiet Austin neighborhood about 3 miles (5 kilometers) from the FedEx store. It was triggered by a nearly invisible tripwire, suggesting a "higher level of sophistication" than agents saw in three package bombs previously left on doorsteps, according to Fred Milanowski, the agent in charge of the Houston division of the Bureau of Alcohol, Tobacco, Firearms and Explosives.

A criminologist at the University of Alabama said if a single perpetrator is behind the blasts, changing the means of delivery increases the bomber's chance of getting caught.

"I think it would suggest that the bomber is trying to stay unpredictable," Adam Lankford said. "But it also increases the likelihood that he would make a mistake."

Authorities have not identified the two men who were hurt Sunday, saying only that they are in their 20s and white. But William Grote told The Associated Press that his grandson was one of them and that he had what appeared to be nails embedded in his knees.

During an Oval Office meeting Tuesday, President Donald Trump said whoever is responsible for the bombings "is obviously a very sick individual or individuals" and that authorities are "working to get to the bottom of it."

Despite bombing tactics that have now shifted, investigators have repeated prior warnings about not touching unexpected packages and urged people to be wary of any stray object left in public. Austin police say they have now responded to more than 1,200 reports of suspicious packages in a little more than a week - without finding anything dangerous.
Report a correction or typo
Related topics:
texasexplosionu.s. & world
Copyright © 2022 ABC11-WTVD-TV/DT. All Rights Reserved - The Associated Press contributed to this report.
TOP STORIES
Man charged in Hope Mills double murder
Smith, Raanta, Hurricanes top Rangers for 2-0 series lead
1 person in hospital after shooting overnight in Raleigh
Parents share mixed reactions over plans for boosters for children
Wake Schools bus driver charged with driving bus while impaired
Fayetteville PD on track to full staffing; what about Durham, Raleigh?
Mail delays blamed on dog, owner claims case of mistaken identity
Show More
Body found on the bank of the Tar River in Edgecombe County
'Thrilled to death': Princeton man wins Cash 5 jackpot
Canes fans pile into PNC for Game 2 despite COVID resurgence
Raleigh resident from Buffalo, NY weary one week after massacre
Judge: COVID-19 asylum restrictions must continue on US-Mexico border
More TOP STORIES News