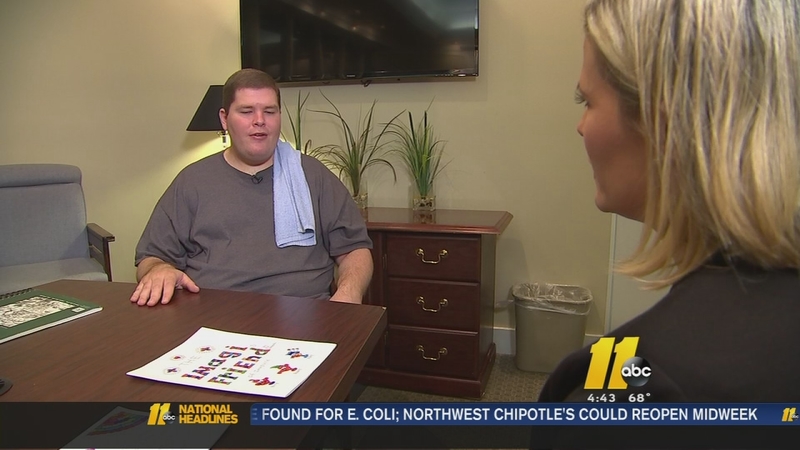 CARY, NC (WTVD) -- Upon first meeting D.J. Svoboda of Cary you can't help but be captivated by his enthusiasm and genuine desire to make the world a better place. In particular, he wants to end bullying and is trying to encourage people to more accepting of others, especially those who might seem "different." It's something he can personally relate to since D.J. is autistic.

But, as D.J. puts it, that's not a bad thing. It just means he and others with autism see and react to the world a little differently than the rest of us.

"Sometimes a child with autism gets really upset, and some people might think it's because of bad parenting, but it's not. It's because the child or teen with autism, or even the adults with autism, cannot explain how he or she is feeling," he explained.

For example, D.J. often carries a blue towel around with him, draped over his shoulder, so that should he find himself frustrated by an inability to pinpoint and express his feelings, he can use the towel he's dubbed his "flapper" to and twist it, snap it, or ball it up. That helps diffuse any anger or anxiety he might be experiencing. It's a coping mechanism he's developed, along with his artistic abilities.

And that, in itself, is a major accomplishment. D.J.'s mom says he was having a hard time even holding a pen up until middle school. But, when a teacher suggested he take an art class to help with those fine motor skills, he not only learned to properly hold a pen, he mastered it, finding a love for doodling and sketching. From there, his talent grew until one day he came up with the idea to create the characters he now calls the "Imagifriends."

"They teach amazing lessons such as teamwork, kindness, friendship, and lending a helping hand, dreaming big, believing in yourself, and the list goes on and on," he explained.

D.J. meticulously draws each colorful, cartoon character by hand, and uses them in greeting cards, calendars and books.

"When I do the art, I can picture them helping the world to understand more about autism, to understand that everybody is special the way they are, because the inside of a person is what matters the most," he said with great conviction.

It's a message he shares not only through his artwork sold online, he's also become somewhat of a spokesperson for autism speaking at various conferences.

"D.J. is able to share his gift with our community as well as the community at large, and he's a great ambassador for what it's like to have autism, because he's not bothered by the fact that he has autism," said David Laxton with the Autism Society of North Carolina. "Sometimes people have preconceived notions about what autism is or isn't, but D.J. is able to break down barriers not only through his artwork but through his words."

And that's proving invaluable to the Autism Society of North Carolina as they, too, try to educate people on autism and cut down on bullying which can certainly target those with disabilities.

"We want people to be as educated as they can be, to learn what they need to about bullying and how to prevent it, and also just to be supportive of our community," Laxton reiterated.

It's a goal D.J. can get behind. And while he might be reluctant to meet your gaze directly as he tells you that, there's no mistaken the passion lighting up his eyes and his smile as he talks about the Imagifriends and the work he sees them doing.

For more on the Imagifriends and to support D.J.'s mission: http://myimagiville.com/
For more information on autism or support services offered in North Carolina: http://www.autismsociety-nc.org/