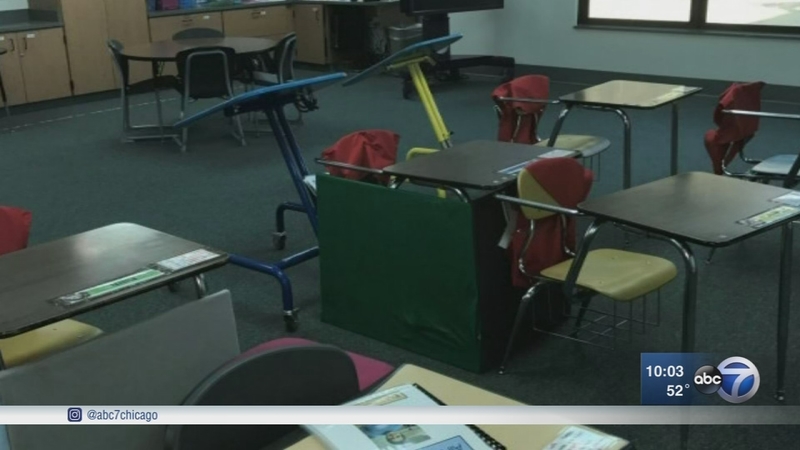 LA PORTE, Indiana -- The parents of a child with autism say their second grader was forced to sit at a desk designed to confine her without their knowledge. They said they were tipped-off by changes in their daughter's behavior.

"I noticed the behavior of my daughter changing. She would have frequent meltdowns when she'd come in," the girl's father, Charles Castle, said.

It's been nearly a month since 7-year-old Kennedi Castle last set foot inside Kingsford Heights Elementary in LaPorte County, Indiana.

The parents of a child with autism say their second grader was forced to sit at a desk designed to confine her without their knowledge.

Her parents withdrew her after one day her father walked into her second grade classroom only to discover a specially modified desk with wooden panels surrounding it to stop her from trying to slide out. Kennedi is diagnosed with autism.

According to Indiana state law, "seclusion or restraint shall not be used as routine school safety measures; that is, they shall not be implemented except in situations where a child's behavior or action poses imminent risk of injury." The parents must also be notified.

"The director told us, 'the teacher's heart was in the right place,'" the child's mother, Heather Castle, said.

That was not enough for the Castles, who have now filed a complaint with the state's Department of Education. The school district must wait for their resolution before taking action.

"We always have the child's safety as our first and foremost concern. If we've erred, it will come out and we will do everything we can to right that situation," said LaPorte Community School Corporation Supt. Mark Francesconi.

For now, Kennedi is taking what are known as homebound classes three days a week out of the local library. LaPorte's Department of Special Education has offered two other schools as alternatives, but Kennedi's parents are reluctant.

"What they did was wrong and my daughter has been traumatized. And I don't trust them at all," Kennedi's mother said.

"Any school should never restrain a child unless someone's life is in danger," said Scott Badesch, president and CEO of the Autism Society of America.

The ASA shares the Castles' frustrations and concern.

"Imagine if your son or daughter goes to school and you find out the school is doing something to physically restrain that child and they don't tell you, you would be livid," Badesch said.

The Castles want everyone involved and authorized to use that modified desk to be disciplined. They're also calling for cameras to be installed in special education classrooms.