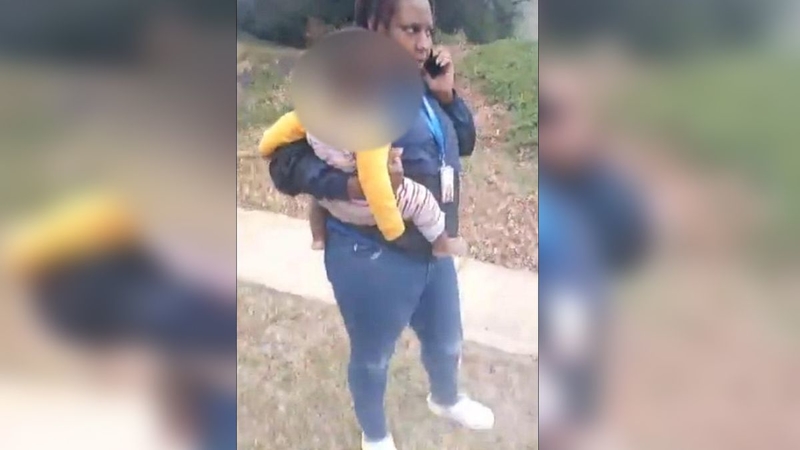 CHARLOTTE, N.C. (WTVD) -- A baby boy wearing no shoes or coat was rescued Tuesday afternoon when he wandered along a busy road in Charlotte.

Two women saw the child, who appeared to be around 1 year old, and immediately jumped out of their car to help.

Renie Kennedy and her daughter Bernadette Ellis ran through the busy street to grab hold of the child and shield him from danger.

"I jumped out the car to run in the street because it looked like the baby was about to go in the street," Ellis told ABC affiliate WSOC. "My instinct was just to pick the baby up. Anybody, you know, the cars were just riding up the street like they didn't even see the baby."

The two women gave the baby a warm blanket and took to social media to try and get help for the youngster.

It turns out a witness called 911 earlier to say a baby was left behind while two people were fighting.

Police arrived at the scene and helped the women make sure the baby was safe and comfortable.

"I have nine grandkids," Kennedy said. "I guess it was just that motherly instinct, that grandmother instinct, to go live (on Facebook) to see if anyone knows who this baby is?"

Charlotte-Mecklenburg Police Department said it had arrested one person in the case, but did not reveal that person's identity, relationship to the baby, or charges.
Report a correction or typo
Related topics:
family & parentingcharlottechild abusebabychild neglect
Copyright © 2021 WTVD-TV. All Rights Reserved.
TOP STORIES
Biotech company Amgen to create 355 jobs in Wake County
LATEST: Some vaccine sites in NC to offer $100 cash cards
At least 20 shots fired in shooting outside Wendy's in Carrboro
2021 hurricane season starts quiet after record-setting 2020
US hits 70% vaccination rate -- a month late, amid a surge
NY Gov. Cuomo sexually harassed multiple women: Probe
Show More
Some used cars currently cost more than their newest models
WCPSS needs more school bus drivers
Officer dead after burst of violence outside Pentagon
Wake school board to vote on mask mandate
These 2 states made up 1/3 of all US COVID cases this past week
More TOP STORIES News