After a two-year hiatus, "Bachelor in Paradise" is back and the cast promises a dramatic ride.
OTRC
By Andrea Lans 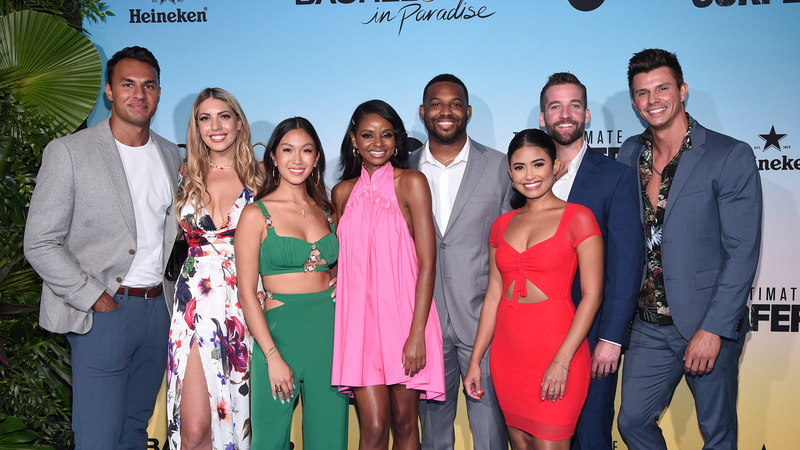 LOS ANGELES -- It's time to return to Bachelor Nation's favorite beach after a two-year hiatus. Twenty-three hopefuls kick off their journey to find love on a tropical oasis in Mexico Monday, with additional arrivals shaking things up throughout the season.

"Just like everyone else that's been living through this pandemic, they haven't been able to leave their house or go on Tinder dates," Wells Adams told On The Red Carpet during the season 7 premiere in Santa Monica, CA. "There's like a lot of pent-up sexual frustatration...and it really comes out in paradise and it's beautiful."

In addition to returning to his post as paradise's bartender, Adams also adds "master of rose ceremonies" to his duties. Adams is joined by David Spade, Tituss Burgess, Lance Bass and Lil Jon, who will split hosting duties this season.

RELATED | Meet the cast of 'Bachelor in Paradise' season 7

"Not only is it going to live up to expectations, it's gonna blow them out of the water," Connor Brennan, who appeared on Katie Thurston's season of "The Bachelorette," said. "Many people, if not most people, reached their breaking point while filming."

Tre Cooper, also from Thurston's season, teased that there are going to be "a lot of intense situations" and "every episode is going to be nuts."

Fans who followed the rivalries of previous seasons will also see those unravel again onscreen. In the season 7 sneak peek, Aaron Clancy is seen going head-to-head with Thomas Jacobs, continuing their fight from Thurston's season of "The Bachelorette."

"It's mayhem, you know, it's definitely chaotic," Clancy said.

Who's going to have the CRAZIEST @BachParadise experience? 👀🌹 It all starts TONIGHT at 8/7c on @ABCNetwork! #BachelorInParadise See more: https://t.co/XVLTUzx45q pic.twitter.com/R4mNWGxBQ3

Surprise arrivals throughout the season will also add to the drama -- one of them being Kendall Long, who dated Joe Amabile after they met on season 5 of "Bachelor in Paradise" in 2018. The couple ended their relationship in January 2020 and Amabile seems to hit it off with Serena Pitt this season, that is, until Long throws their relationship for a loop when she returns to paradise.

"Hearts are definitely broken," Jessenia Cruz, who appeared on Matt James' season of "The Bachelor," teased. "I think a lot of lies get uncovered as well, and you know what that does."