Hair can be a real nightmare. Hulu's horror film "Bad Hair" takes that notion a step further with one killer weave.
OTRC
By Andrea Lans 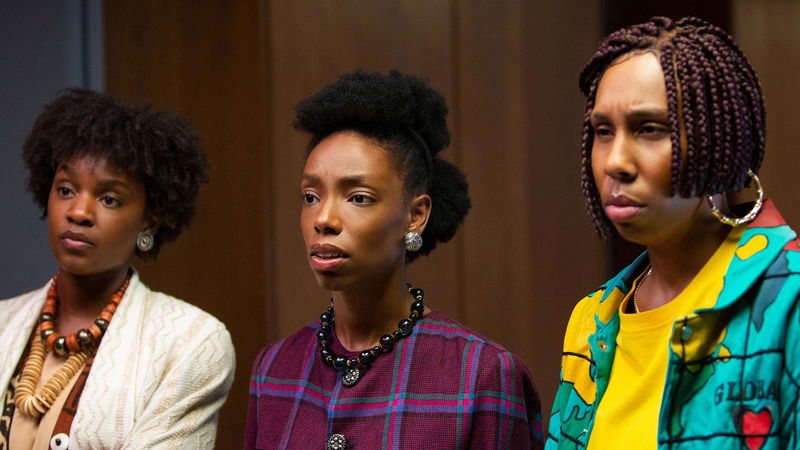 Set in 1989, the film follows Anna Bludso, played by Elle Lorraine, who gets a weave after being criticized for her natural hair at the music television network where she works. But the hair has a mind of its own, possessing Anna and causing harm to others.

Writer-director Justin Simien was inspired by Japanese horror films, where hair is often depicted as a symbol of evil but also packed the narrative with cultural relevance.

"As young, Black girls, you are taught that hair that's straight and easy to deal with is good...and the hair that usually comes out of our heads is bad," Lena Waithe said.

On The Red Carpet's fashion expert, supermodel Roshumba Williams, reminisced about her own hair struggles while interviewing the cast. One scene in particular, where Anna gets her weave put in by Virgie (Laverne Cox), was especially spine-tingling as it brought Williams back to the days she'd spent at the hair salon.
EMBED More News Videos

Like Lorraine's character Anna, the actress has her own hair horror stories to tell. She talked to Williams about enduring chemical burns while getting her hair relaxed.

"[It's] torture if you think about it on a deeper level. I'm torturing myself to burn one part of my scalp just to get the rest of my hair to 'cooperate,'" Lorraine said.

"Hair is a real element of horror in our lives," Simien said. "It should be something that is incredibly individualistic and totally up to [a woman], and it is not in this country."

However, Lorraine said that we are effectively changing the narrative of what is considered "good hair vs. bad hair."
"The younger people coming up who get to see so many Black women rocking their natural hair don't know the version of 'bad hair' that we grew up with," the actress said.

Although "Bad Hair" is a horror film, actor Blair Underwood promises some laughs too.

"It's got some scary, suspenseful elements, but it's also funny at the same time," Underwood said.