ABC11 Together highlights the strength of the human spirit, good deeds, community needs, and how our viewers can help
WTVD
By Diane Wilson 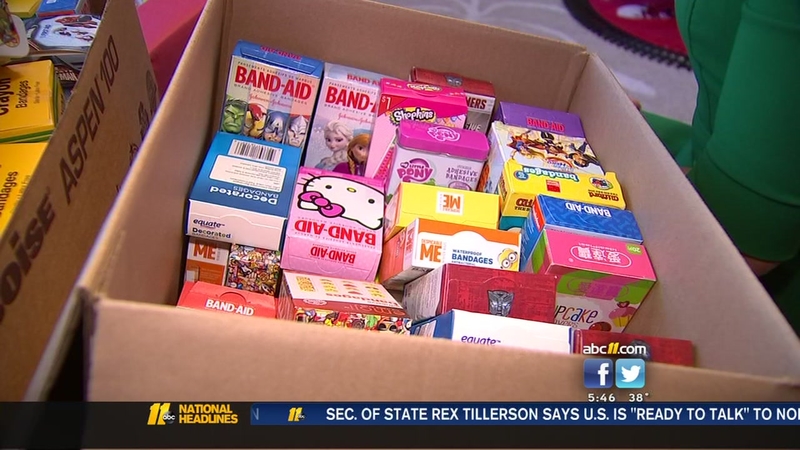 Something as simple as a colorful character themed band-aid brings a smile to kids who are fighting cancer.

Something as simple as a colorful band-aid with a favorite character on it can make all the difference when a child is battling cancer.

Sarah Thompson's son Edward has cancer, and she says, "These kids can't control much, but the one thing the can control is picking out a fun band-aid after they've been pricked for treatment several times."

After highlighting the need for those type of band-aids, donations poured into our ABC 11 studios. Several viewers sent boxes of kid-themed band-aids through Amazon. Total Fire Systems, Inc out of Youngsville sent a box full of donations. Wendy Lundy of Fayetteville heard about the need, and set this collection box outside of where she works at Pine Forst High School. She says, "Something just hit me, and I decided it was something I wanted to do. I only expected to get a few boxes, and I was expecting to get as many as I did." In a short time, she collected over 7,000 kid-themed band-aids. Students from the Garden Club at Moore Square Middle School in Raleigh also held a donation drive and collected dozens of boxes of kid-themed band-aids.

Stetson's sister and the donations they collected


Today, another surprise delivery to our ABC 11 studios, the Cub Scout Pack 347 from Northside Community Church in Knightdale sent more than 100 boxes of kid-themed band-aids to add to our collection. In a few short weeks, ABC 11 viewers donated more than 15,500 band-aids all to help bring smiles to kids that are going through so much.

I dropped off all of the donations to Edward so he could take the band-aids to the hospital during his next cancer treatment. Edward was shocked over the number of donations. He adds, "Band-Aids are a little thing that can make a big difference. This is amazing." He told the story of how a kid-themed band-aid helped him after a long day of treatment. He says, "We have been there since the moment they opened, and we shut them down that whole day. I was getting a little antsy with the nurse, and she came out with one of those mermaid bandaids and just stuck it on me. It made me laugh after a long day."

Lorelei and her mom Katie