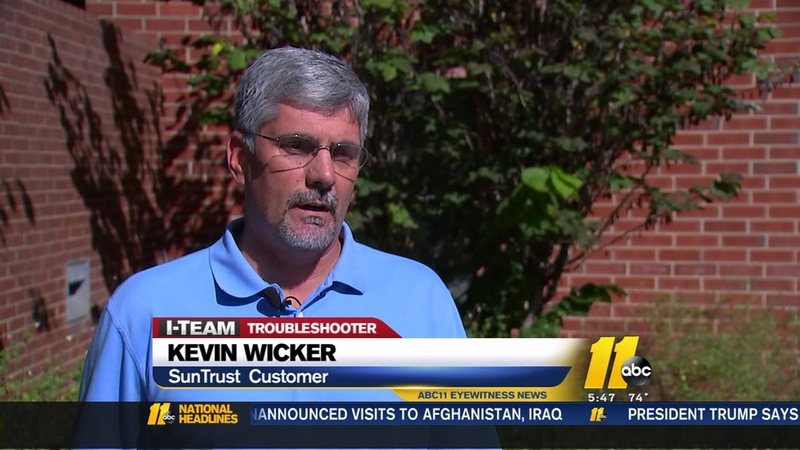 DURHAM, North Carolina (WTVD) -- How often do you check your bank account and credit card statements?

Kevin Wicker learned to check it often as it helped stop what he calls fraudulent activity on his account.

It started with a $3,000 deposit in a joint account that Kevin has with his son. It was at an ATM in Florida, and Kevin says he and his son were both in North Carolina at the time.

Kevin says he went to his local SunTrust branch right away to report the fraud. He started doing some investigating, some looking, and right then, he says, the money was withdrawn at an ATM in Miami.

Besides the fraudulent $3,000 deposit, Kevin says $483 was also fraudulently withdrawn from the account through an ATM.

In fact, that fraudulent transaction happened while he was sitting in the bank reporting suspicious activity.

"The way they talked to me about it was that we saw it. We know you're here. We've seen your history," Kevin recalled. "(You) shouldn't be worried about it. We're going to get the case started and should be able to take care of it."

Kevin even filed a police report and then waited to hear from SunTrust.

Then came the bad news - SunTrust told him they closed the case.

"They kept coming back saying that we're satisfied with what we investigated and they don't see any fraud," Kevin said.

Kevin got in touch with me, and I reached out to SunTrust.

Because of customer-privacy standards, SunTrust couldn't give me information on the case, but Kevin did get good news.

In a letter, SunTrust said they were issuing a check to Kevin and his son in the amount of $483 plus any fees incurred.

Kevin said he is happy with the resolution.

"I appreciate your help. I do believe 100 percent we would not have gotten our money back if it wasn't for your help - and thank you," he said.