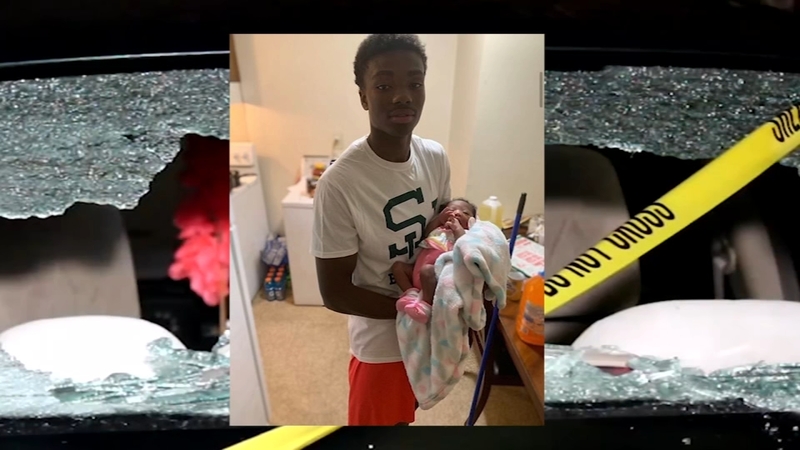 BENSON, N.C. (WTVD) -- A high school football player who just became a father was among three people shot in a hail of gunfire at an apartment community in Benson.

It happened just before 1 a.m. Saturday when police responded to Whittington Street and Benton Street for a shots-fired call.

Police said three people were shot. One woman who did not want to be identified told ABC11 that she shielded two school-aged girls from gunfire behind a car. One of the bullets hit a tire near her.

She estimated that at least 20 shots were fired.

One of those shooting victims is CJ Redmond, 15, a receiver and defensive back for South Johnston High's football team, his family said.

"Thank God it was family around," CJ's sister, Ka'Niya Moore, told ABC11. "We were applying pressure to the wounds."

CJ, who recently became father to a newborn daughter, is being treated at WakeMed Raleigh.

"Man I lost it," Moore said. "That's my brother. I ain't never had nobody close to me like that get shot. And he's only 15, so it's like -- dang. And the fact that he was an innocent bystander and he got it the worst -- that's still crazy. And he's the only boy out of our siblings. Sometimes I think about it, of course. But as long as I know he good -- I'm good."

Moore told ABC11 that the doctors said they did not remove the bullet from CJ because it could cause more damage.

"But they said as he gets older, he's going to heal and will still be able to play," Moore said.

"That boy is a football star," Marcus Williams, a neighbor, said of CJ. "He didn't deserve what he got. Now he won't be able to play for the season. Why?"

Benson police said three people were shot overnight at the intersection of Whittington and Benson streets.

The target of the attack was apparently a man who goes by "Kodak," ABC11 has learned,. He was shot in the chest and was taken to the hospital for surgery.

A third shooting victim, who was grazed by a bullet, was identified as Tiffany Burgess.

Police said they have identified a "person of interest" in the case but have not elaborated. Benson Police said Monday afternoon that the investigation is ongoing.

There were security cameras at the scene, they are not working because neither the town nor apartment complex are willing or able to pay to keep them operational, residents told ABC11.

"These cameras don't work," Moore said. "They ain't worth nothing. They paid $30,000 for these cameras. They got money to spend for stuff they don't need that's not even connected yet."

She said the cameras have been in place for about a month.

The Town of Benson told ABC11 it does not yet have any official comment about the security cameras.