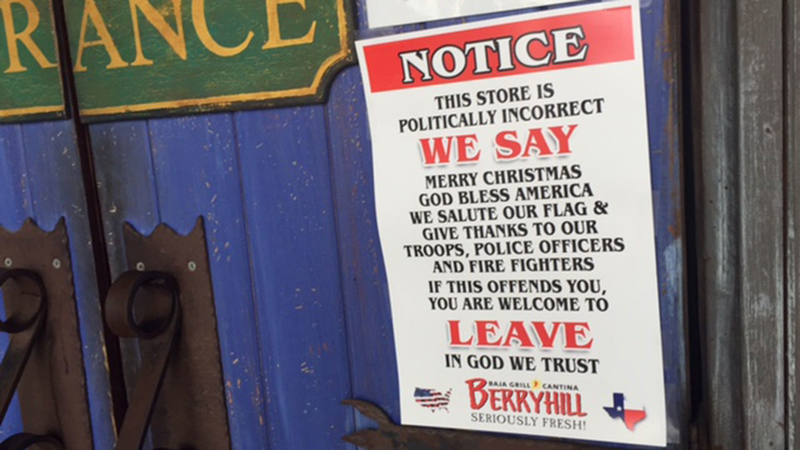 HOUSTON -- Businesses take a lot of care in catering to customers and clients, avoiding offending them at nearly any cost.

That is why signs posted on each of the five company-owned Berryhill Baja Grill restaurants in the Houston area are getting attention.

The signs read: "Notice. This store is politically incorrect. We say Merry Christmas. God bless America. We salute our flag and give thanks to our troops, police officers and firefighters. If this offends you, you are welcome to leave. In God we trust."

It is signed, Berryhill.

The signs were posted at the direction of Berryhill CEO Jeff Anon. The tipping point for him was the generic red cups used for the holiday season by a well-known coffee establishment. At the time it was described as more inclusive for people of all beliefs.

When Anon's son showed him a picture of similar signs going up at other businesses around the country, he had his own printed.

"I don't think anybody means anything bad or mean when they say Merry Christmas, and I thought somebody had to stand up and say enough of this," he said.

Some signs have disappeared from the restaurants, from customers who were offended. They are quickly replaced.

"I guess the political correctness has gone overboard sometimes," he said.

Ditto for Cynthia Bivins. While lunching at the Post Oak location with her friend, the attorney said, "I celebrate Christmas. I salute the flagl I'm an American. It doesn't offend me at all."

Business continues to go well at Anon's restaurants. The company owns five Berryhills in Houston. There are franchises as well. Anon says those are not included on the sign list, and doesn't know if any franchise-holders have asked to display them.