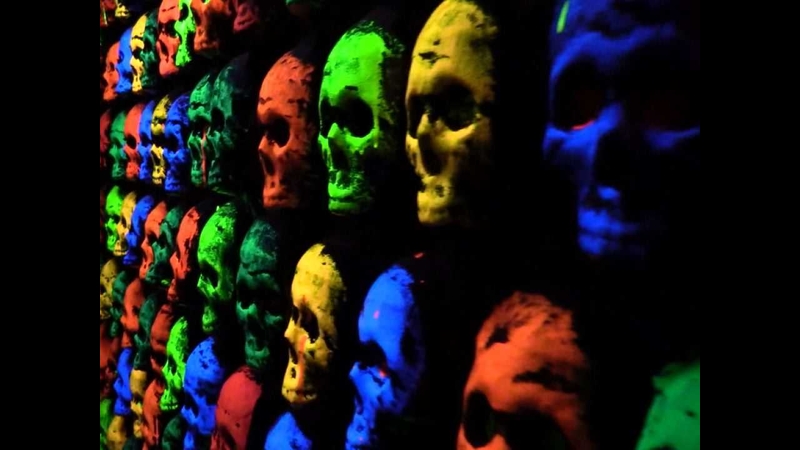 Top scares: The best haunted houses in our area this year

Halloween is here once again, and with that comes all things creepy, like seeing hundreds of people flock to haunted houses and pay to have masked creatures scare the living daylights out of them.

It's weird, right? All year we avoid fear, hiding from the things that lurk in the darkness. But boom, October hits and suddenly we stay up all night binge watching slasher films and seeking the things we try our hardest to avoid--our biggest fears.

Why do we do it? Does anyone actually enjoy watching a scary movie and then having to shower with their eyes darting about while quickly turning around and scrubbing their face as if someone is about to pull back the curtain and recreate a scene from "Psycho."

But we seem to love it anyway.

If you want to feel like you're in a horror movie or just want a really good scare, these are the best haunted houses in our area to do just that while not costing you a fortune.

Editor's note: When I go to a haunted house I want more than just predictable jump scares and a masked creature chasing me with a chainsaw, which obviously doesn't have the blades attached. I mean let's be real, with all of the gore we see in movies and television nowadays, fake blood and a man following me down a dark hallway aren't going to cut it. I want something that preys on my fears. And that is what these haunted houses will give you.

Clayton Fear Farm has been a favorite of locals for years, which is no surprise because it's close, cheap, and has something for the whole family.

During the day, the little ones can enjoy hayrides, a corn maze, a pumpkin patch, and more. But when night falls, the ghouls come out to play.

The one downside for an adult would be that it seems to be overrun with high schoolers.

I spent most of the night trying to avoid a high school jock running into me because he was about to pee his pants rather than enjoying the attraction. So, if you're an adult looking to take a break from the teens, I'd go as late as possible.


Location: 1620 Loop Road, Clayton, NC 27527
Price: $27
Number of attractions: 7
Highlight: The food! This haunted attraction actually started off as a produce farm, so it's no surprise Clayton Fear Farm offers up some scary, delicious treats. As soon as you take your first few steps from the parking lot, the scent of caramel popcorn and all the other goodies wafts through the air!

This haunted house has one thing others lack: It's produced by real Hollywood filmmakers.

Dean Jones and his brother Starr Jones have long résumés including works such as "Star Trek: The Next Generation," "Pirates of the Caribbean: On Stranger Tides," and "The Hunger Games: Mockingjay - Part 1."

The pair has put their movie skills to the test and brought some real Hollywood scares to their home state.

The men have built one giant haunted house, which features several movie-like scenes, that features some of your favorite serial killers with scares at every turn.

But one of the attraction's best features, other than the handcrafted and unappreciated sets that go unnoticed, is The Last Ride.

It's a casket ride which mimics you being carried off to the grave. You lie down inside a casket as two men take you to your final resting place.

But be aware, the casket actually moves and it has some rather unpleasant smells. It will be The Last Ride you'll ever take.

Location: 6333 Bass Mountain Road, Snow Camp, NC 27349
Price: $25
Number of attractions: A haunted house which features 30 different scenes and the last ride.
Highlight: The museum. In addition to the two attractions, there is a museum that displays the pair's work in the film industry and a Wall of Fame featuring signed portraits of actors and actresses they've worked with. This is great for horror buffs, as it brings history and behinds the scenes to life.

Panic Point has become a top pick among locals, which is not surprising.

This haunted attraction is tucked away in the forest and at night, you lose all sense of sight and direction, allowing fear to set in and ultimately, leaving you vulnerable and let's face it, a little scared -- the perfect situation for the ghouls lurking in the dark.

You can take a trip through the Dark Trail or Haunted Forest, but whichever one you take, don't let go of the guiding rope.

Also, be sure to look behind you. These creepy creatures love to follow you.


Location: 2808 Cedar Creek Road, Youngsville, NC 27596
Price: $35 for general admission ($30 online)
Number of attractions: 6
Highlight: The Haunted Forest. This attraction is what Panic Point is known for and it's for obvious reasons. Their forest is packed with scary attractions, making it perfect for everyone in your group.

Kersey Valley Spookywoods is one haunted house you don't want to miss.

It's like a house party, haunted house, and escape room all rolled into one.

From the moment you enter the property, you become fair game to the haunted creatures, meaning they can mess with you -- and they will taunt you.

During your trip, you'll come across zombies, monsters, and creatures that look like something from your nightmares except you aren't asleep and the freaking thing really is walking toward you.

So, whether you're doing the monster mash or screaming your lungs out, you'll be sure to have a great time.


Location: 1615 Kersey Valley Road, Archdale, NC 27263
Price: $30 for general admission ($5 for parking)
Number of attractions: 12
Highlight: Village of the Damned. While this attraction isn't super scary, it's super fun! You're given a laser gun and are asked to help the military fight zombies who have taken over a Puritan community. The mission is based in a foggy cornfield, but what really makes this great is the ambiance which makes it feel like authorities are really flying above you.

Woods is Terror is one haunted attraction that truly lives up to its name.

History says when many died during the Great Depression their spirits were left to linger on Earth, and after they began terrorizing the living they were ultimately trapped on the grounds by the current owner's great-great-grandfather Father Eddie Howie McMillan.

Through the years, owner Eddie McLaurin said he learned how to capture other spirits that were among the living and not among the dead and release them into the same plot of land, McMillian once did, which are now known as the Woods of Terror.

That may be why many actors say unexplainable things happen in the attractions after hours.

But if you're not buying the spooky history, it doesn't matter because this place doesn't need it.

This attraction feeds on your fears and worst nightmares.

And they have it all. Whether it's darkness, clowns, spiders, or just a madman in a mask, you can sure it will be chasing after you.

The best part is that this place puts you in the action.

Whether it's being chosen as a victim or choosing your own fate, this place will have you asking yourself one question: "Why on Earth am I doing this?"

Also, keep in mind most of this place is interactive, so all of your actions have consequences.


Location: 5601 N Church St., Greensboro, NC 27455
Price: $20-32 for general admission ($5 for parking)
Number of attractions: 13
Highlight: Chaos 3D, also known as the clown room, is so overwhelming it's nearly indescribable. The whole scene is painted with bright colors and is flooded with peppy and pissed clowns. What makes this room even more trippy is you wear 3D glasses while walking through, as if you didn't feel vulnerable enough.

Blackout Terror. You definitely don't want to skip this one! While many places have you walk through a dark room, Woods of Terror kicks it up a notch by making you wear a hood--yes, a hood. Wearing the hood adds an extra sense of insecurity. While you're relying on your hands and ears to get you through, your mind starts to play tricks on you, but be cautious while using those senses because you never know where danger is lurking.
Report a correction or typo
Related topics:
community & eventsyoungsvillegreensboroclaytonncghosthalloweenentertainmentbuzzworthyalamance county newsfun stuffhaunted house
Copyright © 2021 WTVD-TV. All Rights Reserved.
TOP STORIES
Level 2 risk for severe storms today
Fight caused chaos at Southpoint, police say; No evidence shots fired
LATEST: When will mask mandates end?
2021 NC State Fair's final days attract big crowds
Public hearings offer input on NC redistricting proposals
Crew member: Baldwin was careful with guns before fatal shooting
Show More
2 children dead as drag racer plows into spectators
Cary fatal shooting suspect involved in standoff with RPD officers
James Michael Tyler, known for 'Friends,' dies of cancer
Halloween star Anthony Alfano reveals 2021 costume
SC authorities release 911 calls made after Alex Murdaugh shooting
More TOP STORIES News