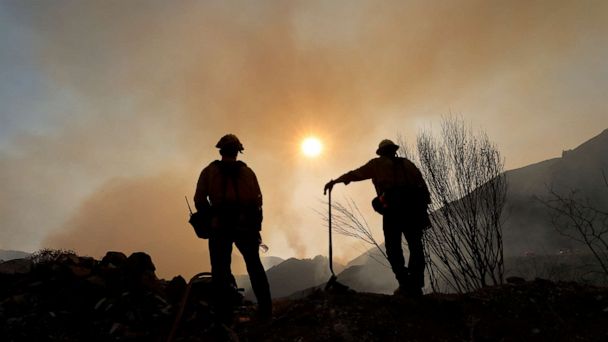 Remnants of Beta continue to soak the South, as 4 to 7 inches of rain fell in Louisiana, southern Arkansas and Mississippi in the last 48 hours, which produced flash flooding.

Flood watches have been issued for Mississippi, Alabama and southern Tennessee Thursday morning, as remnants of Beta slowly move northeast.

The heaviest rain will move into northern Alabama and southern Tennessee, where some areas could see 1 to 2 inches of rain per hour Thursday night.

The flood threat moves into the southern Appalachian mountains and the western Carolinas on Friday, including Asheville and Charlotte, North Carolina.

Raleigh and eastern Carolinas get into the heavy rain by Friday afternoon.

The forecasted rainfall totals could reach 2 to 5 inches from Alabama to Tennessee and into the Carolinas.

Meanwhile, in the West, 21 wildfires are still burning in California alone, including the Bobcat fire, which is 113,733 acres. Containment for that blaze almost doubled Wednesday to 39%.

The Creek Fire in northern California is a whopping 289,695 acres, which is the single largest fire in California history. It is only 34% contained.

The worst of the winds will be in the Rockies from Montana down to Utah, where red flag warnings and wind alerts have been issued Thursday.

A fire weather watch has been issued for the northern half of California for this weekend, as wind is forecast to increase.