Beverly Bass, real-life pilot featured in 'Come From Away,' reflects on 9/11, Broadway show 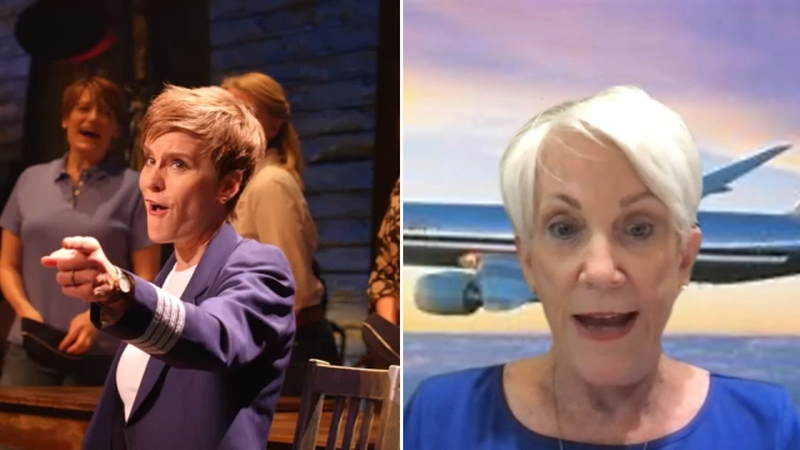 NEW YORK -- A Broadway musical that's reopening later this month -- with the film version of the stage show now streaming -- tells a tale of 9/11: A story of perseverance and kindness that almost got overlooked in the aftermath of the catastrophe.

"Come From Away" is a celebration of how 7,000 passengers in 40 jets were welcomed by the residents of a small town, but it is also the story of a trailblazing pilot who kept everyone calm on that tragic day.

U.S. airspace was closed after planes struck the World Trade Center, and airliners forced to the ground landed at the Canadian town of Gander in Newfoundland.

"People say, 'How can you make a musical about this tragedy?'" said Rachel Tucker, who starred in the show in London and Dublin. "Well, just watch the show and you'll understand how that happens."

Tucker plays real-life pilot Beverly Bass, the first woman ever promoted to captain at American Airlines, and both joined us on a Zoom call.

"(Rachel is) like a little spitfire onstage, and I just think she plays the role so beautifully," Bass said. "It makes me so proud to watch her portray me."

Bass, who is now retired, has seen this show many times. But she says the first time was the hardest.

"My husband and I were just stunned," she said. "We were sitting three rows back, right in the center, and when she comes out, rolls her chair and says, 'Hi Tom, I'm fine,' my husband buried his head in his hands, and I'm not even sure he saw the rest of the show. What it made me realize, though, is how difficult that day was for my family. It was much more difficult than it was for me, because I had a job to do."

Bass said the toughest moment of the day was telling the passengers about the diversion to Gander, because she had so little information at that time about what happened on 9/11.

"And then when we got to Gander, we were actually on the airplane 28 hours before we got off," she said. "So I would say it was probably 30 hours before our crew actually saw visuals of what had happened on TV."

In "Come From Away," Bass is clearly shown as a heroic figure, but she doesn't see it that way.

"I did not do one thing that any other captain at any airline wouldn't have done," she said. "It was just, I was in the right place at the wrong time, or the wrong place at the right time. I'm not sure which one it was."

When it comes to Bass, the word "unflappable" comes to mind, as she was truly calm in the worst kind of crisis.