WASHINGTON -- President Joe Biden's job approval rating has fallen underwater in the latest ABC News/Washington Post poll amid broad disapproval of his handling of the U.S. withdrawal from Afghanistan, including a share of blame on Biden for conditions leading to last week's devastating Kabul airport attack.

Overall, in a sad coda to the nearly 20-year, $2 trillion effort, just 36% of Americans say the war was worth fighting. There was 77% support for the United States withdrawing; the sticking point is how Biden handled it: 60% disapprove.

Slammed by the crisis, his overall job approval rating in this poll, produced for ABC by Langer Research Associates, is down to 44%, with 51% disapproving - down 6 percentage points in approval and up 9 in disapproval since late June. Intensity has moved decidedly negative: Many more now strongly disapprove, 42%, than strongly approve, 25%. 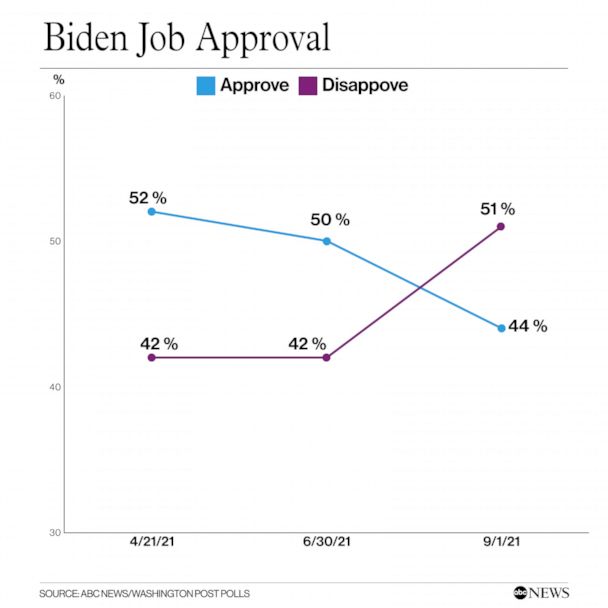 A substantial 44% think the withdrawal left the United States less safe from terrorism, while only 8% think the country is safer as a result. (The rest see no difference.) One factor: nearly half, 46%, lack confidence that the United States can identify and keep out possible terrorists in the ranks of Afghan refugees.

Still, another result marks a humanitarian impulse despite that security concern: Sixty-eight percent support the United States taking in Afghan refugees after they've been screened for security, versus 27% opposed. That's far more support than Americans expressed for accepting Syrian and other Mideast refugees in 2015, 43%. 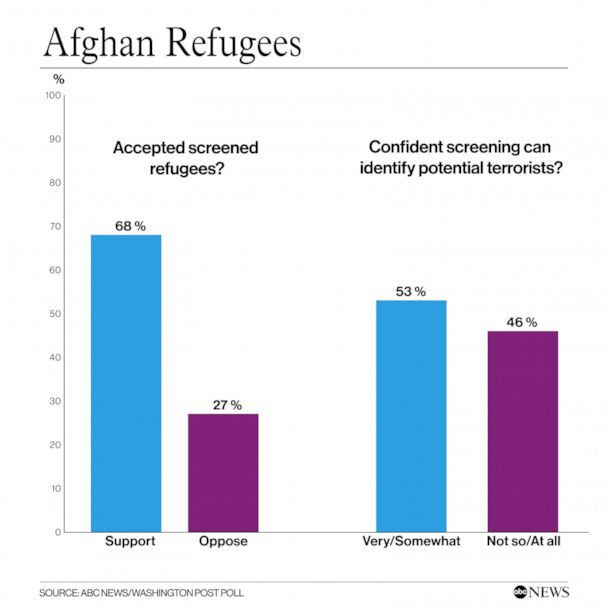 Another measure simply asks if Americans approve or disapprove of how Biden has handled the situation in Afghanistan. On this, 30% approve, with, as noted, 60% disapproving. 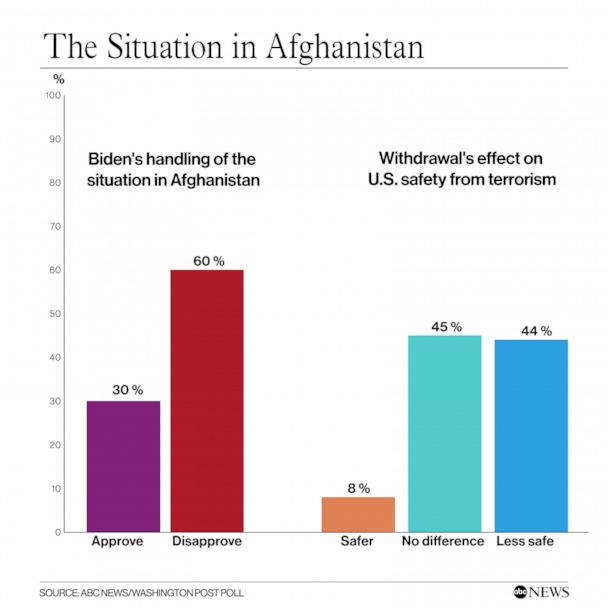 Further, 53% say his handling of the withdrawal bears some blame for the suicide bombing attack that killed 13 U.S. service members and more than 170 Afghans last week -- a great deal of blame, 38%, and a good amount, 15%.

Biden came into office with 67% approval for his handling of the transition, but that quickly subsided to 52% job approval in April, held roughly steady at 50% in June and is down to 44% now.

In polling data since the Harry Truman administration, only two presidents have had a lower approval rating at this point in their terms: Donald Trump, at 37% in August 2017, and Gerald Ford, also 37%, in March 1975. 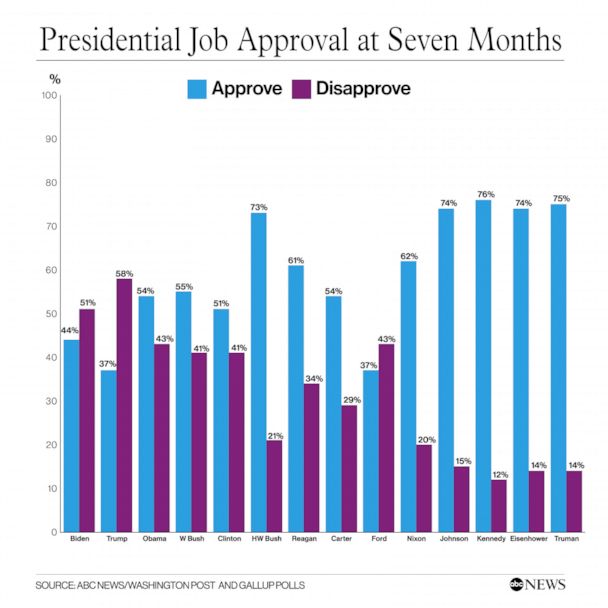 In shifts since June, Biden's approval is down especially among men (down 10 points), urban residents (down 10), independents (down 9), Democrats (down 8) and slightly among whites (down 6). It's essentially unchanged among women, suburban residents, Republicans and racial or ethnic minorities.

The drop among men reflects their much higher likelihood of placing some blame for the Aug. 26 airport bombing on Biden's handling of the withdrawal: Sixty-two percent of men hold this view, compared with 45% of women.

Political differences are very sharp. Biden has just 8% overall approval from Republicans, and 36% from independents, compared with 86% among Democrats. It's 13% among conservatives, 53% from moderates and 69% among liberals.

The president's rating drops especially steeply among Democrats when it comes specifically to his handling of the situation in Afghanistan. Here, he gets 56% approval within his own party, 30 points lower than for his job performance overall.

Partisan differences subside on another measure: Majorities across the political spectrum support accepting screened Afghan refugees -- 79% of Democrats, 71% of independents and, fewer, but still 56% of Republicans. Results are similar by ideology, with accepting refugees backed by 80% of liberals, 77% of moderates and 58% of conservatives. Support is lowest, albeit still a majority, among the least-educated adults -- 54% among those who haven't gone beyond high school.

This ABC News/Washington Post poll was conducted by landline and cellular telephone Aug. 29-Sept. 1, 2021, in English and Spanish, among a random national sample of 1,006 adults. Results have a margin of sampling error of 3.5 percentage points, including the design effect. Partisan divisions are 30-24-36%, Democrats-Republicans-independents.