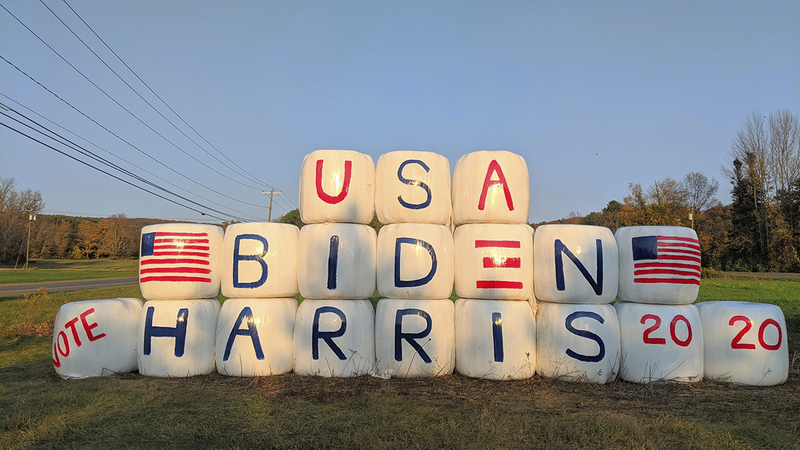 DALTON, Mass. -- A stack of hay bales on a Massachusetts farm decorated in support of the Democratic presidential ticket that was burned down has been replaced with a similar display with a different message.

The original display at Holiday Brook Farm in Dalton featured 19 wrapped hay bales painted with the words "USA" and "VOTE" along with the names of Democratic presidential nominee Joe Biden and vice presidential candidate Kamala Harris.

A local man is accused of burning it down on Friday evening. No one was hurt.

The new, nearly identical stack of hay bales now says "Love, Unity, Respect" and features a pair of U.S. flags, a globe and the word "VOTE."

Farm owner Dicken Crane told The Boston Globe he decided on the new message after seeing the widespread attention drawn by his first display.

"We really didn't want to increase the divisiveness around the election," Crane said Monday. "It's a message that we really hope this country is about. If we respect unity and love, it makes the names on the political message less important."

The suspect, Lonnie Durfee, 49, of Dalton, pleaded not guilty Tuesday to burning personal property. He was held without bail pending a hearing to determine whether he is a danger to society, which is scheduled for Friday, The Berkshire Eagle reported.

Prosecutors requested the hearing based on a prior arrest for assault and battery in 2014.

A voicemail message was left Tuesday with Durfee's attorney.

Durfee used motor oil and gasoline to set the display alight because he "disagreed with the political stance it represented," according to the police report.