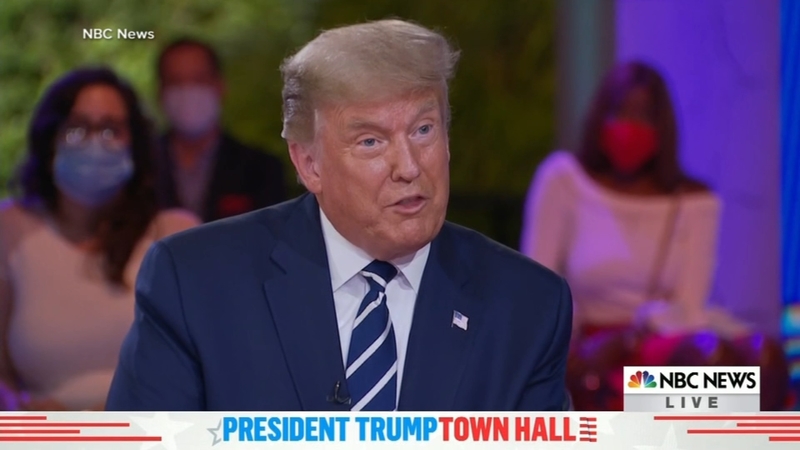 WASHINGTON -- President Donald Trump and Democratic rival Joe Biden faced inquisitive voters on separate stages in different cities Thursday night in a substitute for the debate that was meant to be.

Here's how some of the rhetoric compared with the facts in the prime-time events and a day of campaigning:

Trump's claim: "We had the greatest economy in the history of our country."

The facts: The numbers show it wasn't the greatest in U.S. history.

Did the U.S. have the most jobs on record before the pandemic? Sure, the population had grown. The 3.5% unemployment rate before the recession was at a half-century low, but the percentage of people working or searching for jobs was still below a 2000 peak.

Nobel Prize-winning economist Paul Romer looked at Trump's economic growth record this month. Growth under Trump averaged 2.48% annually before the pandemic, only slightly better than the 2.41% gains achieved during Barack Obama's second term. By contrast, the economic expansion that began in 1982 during Ronald Reagan's presidency averaged 4.2% a year.

So Trump is wrong.

Biden's claim: "All the way back in the beginning of February, I argued that we should be keeping people in China. And we had set up, in our administration, a pandemic office within the White House."

The facts: Biden's comments about what his administration would have done differently at the beginning of the pandemic were lacking some context.

What Biden appeared to be referencing was the United States having Centers for Disease Control and Prevention staff based in China in order to monitor the spread of the virus. Reuters reported earlier this year that the Trump administration had cut the number of staff in China by more than two-thirds, mostly over the previous two years in the agency's Beijing office.

In a Democratic presidential primary debate in February, Biden referred to funding cuts for public health agencies. "What I would do immediately is restore the funding," he said then. "I would be on the phone with China and making it clear, we are going to need to be in your country."

His answer at the town hall Thursday night did not provide that full context, though, which made it sound like he could have been referring to whether he supported putting restrictions on travelers coming from China to the United States, a step President Donald Trump took at the beginning of February.

It was not until the beginning of April that Biden's campaign confirmed in a statement to CNN that he supported Trump's decision to bar some travel from China, because the move was supported by scientists and medical experts.

Trump's claim: "When I see thousands of ballots dumped in a garbage can and they happen to have my name on it? I'm not happy about it."

The facts: Nobody has seen that. Contrary to Trump's repeated, baseless attacks on voting security, voting and election fraud is vanishingly rare. No cases involving thousands of ballots dumped in the trash have been reported in this election.

Trump has cited a case of military ballots marked for him being thrown in the trash in Pennsylvania as evidence of a possible plot to steal the election. But he leaves out the details: County election officials say that the seven ballots, along with two unopened ones, were accidentally tossed in an elections office in a Republican-controlled county by a single contract worker and that authorities were swiftly called.

In the five states that regularly send ballots to all voters, there have been no major cases of fraud or difficulty counting the votes.

Biden's claim: Biden claimed that neither he nor the doctors he has spoken with had seen a plan from the administration to distribute a COVID-19 vaccine. "There should be a plan," he said. "When we have the vaccine, how do we distribute it?"

The facts: The Trump administration does have a plan to distribute a potential COVID-19 vaccine, although the president has misrepresented how quickly it could be distributed.

Some of that plan was outlined in a Sept. 16 "Distribution Strategy," released jointly by the U.S. Department of Health and Human Services and Department of Defense.

The documents, according to HHS, provide an overview of distribution plans along with guidelines for "state, tribal, territorial, and local public health programs and their partners on how to plan and operationalize a vaccination response to COVID-19" in their communities.

The Trump administration also created "Operation Warp Speed," a partnership between HHS and DOD, as well as other private and federal agencies, to accelerate the research, development and eventual distribution of COVID-19 vaccines and treatments.

HHS Secretary Alex Azar has said that as part of Operation Warp Speed, federal officials have been laying the groundwork for vaccine delivery. "This in-depth, round-the-clock planning work with our state and local partners and trusted community organizations, especially through CDC, will ensure that Americans can receive a safe and effective vaccine in record time," Azar said in a press release last month.

Meanwhile, the Centers for Disease Control and Prevention executed a contract with McKesson -- the company that distributes the annual flu vaccine -- to distribute the COVID-19 vaccine when it becomes available.

Trump, though, has exaggerated how quickly most Americans could receive it, suggesting it would be widely available by the end of the year or even sooner. Federal public health officials and outside experts say most Americans will not be able to get vaccinated until well into next year.

Biden's claim: Biden said he had not seen a distribution plan for Regeneron's monoclonal antibody treatment for COVID-19. "What's happening is there is no plan to figure out how to distribute it," he said. "How many -- you know, we have 500,000, you know, vials of it. Well, we don't have all the testing equipment. We don't have all the ability to get it to the people who need it."

The facts: Biden is correct to suggest that Trump has overstated the promise of Regeneron's monoclonal antibody treatment for COVID-19.

However, there is a federal plan for distribution of the treatment touted by Trump.

The U.S. Department of Health and Human Services has said the government is stockpiling doses of antibody treatments for Americans and that it plans to distribute those doses to state governments and hospitals similar to how it delivered the drug remdesivir, another therapeutic that has been administered to people with COVID-19.

Since Oct. 1, hospitals have been able to purchase remdesivir, also known as Veklury, directly from the drug's distributor. Over the past five months, the U.S. government had overseen the allocation and distribution of the drug in its limited supply.

HHS Secretary Alex Azar has said his agency does not anticipate a problem with delivering the doses so long as the drug receives authorization from regulators.

Trump's claim: "Just the other day they came out with a statement that 85% of the people that wear masks catch it so ... that's what I heard and that's what I saw." - town-hall event in Miami.

Trump, looking out over his crowd: "Look at all the masks. You know, they keep saying, 'nobody wears a mask, wear the mask.' Although then they come out with things today. Did you see CDC? That 85% of the people wearing a mask catch it, OK?" - remarks at rally during the day in Greenville, North Carolina.

The facts: He's botching the study's findings, repeatedly. The study cited, by the Centers for Disease Control and Prevention, did not find that 85% of mask wearers catch COVID-19. If that were the case, the majority of Americans would be infected.

It found something quite different: that 85% of the small group of COVID-19 patients surveyed - about 150 on this question - reported they had worn a mask often or always around the time they would have become infected.

The group's exposure to potentially infected people in the community varied. Most reported shopping or being in a home with multiple people. But they were twice as likely to have eaten at a restaurant, where masks are set aside for the meal, than were uninfected people in a control group.

Most studies have shown that wearing masks reduces the transmission of the virus by blocking respiratory droplets. Several studies have also shown that masks could offer some protection for the people who wear them.

The findings were in a CDC Morbidity and Mortality Weekly Report, published last month.

Trump, reacting to the news that people associated with the Biden campaign on a recent flight with Harris tested positive for COVID-19: "We extend our best wishes, which is more than they did to me, but that's OK." - Greenville rally.

Hours after Trump's early morning announcement on Oct. 2 that he had tested positive, both Biden and Harris sent their wishes for a quick recovery via Twitter.

"Jill and I send our thoughts to President Trump and First Lady Melania Trump for a swift recovery," Biden wrote. "We will continue to pray for the health and safety of the president and his family."

Harris tweeted a similar message "wishing President Trump and the First Lady a full and speedy recovery. We're keeping them and the entire Trump family in our thoughts."

The Biden campaign at the time also announced it would stop running negative ads, with the candidate tweeting that "this cannot be a partisan moment" after the news that Trump was going to Walter Reed National Military Medical Center for treatment of his coronavirus infection. Biden's camp resumed the advertising after Trump was released from Walter Reed.