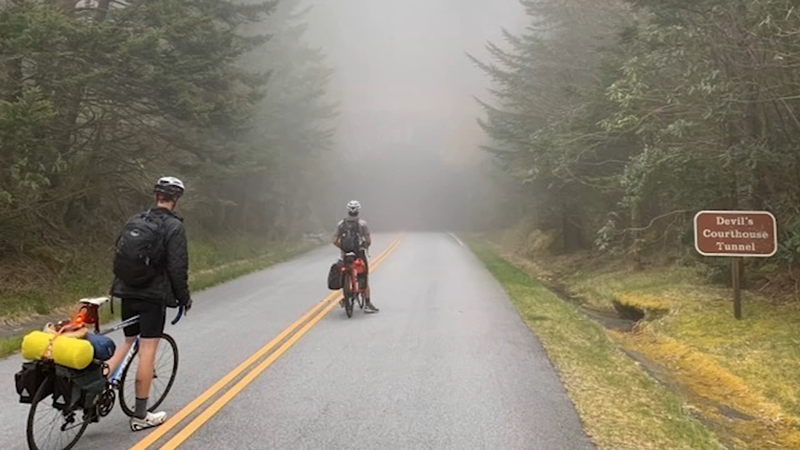 From Murphy to Manteo, college students bike to fight hunger

RALEIGH, N.C. (WTVD) -- NC State graduate Noah Leesnitzer didn't get to walk across the stage to get his diploma because of COVID-19 concerns, instead, he biked across the state.

"I just know that it came to my mind and I decided that would be a great way to celebrate graduating, the 21-year-old Leesnitzer said. "I knew Forrest had some experience biking and I brought it up to him."

"It was originally Noah's idea," Duke graduate Forrest Pratson said. "He got a bike from his brother and thought he was going to do it alone. Thought it was a cool idea and asked if I would come. Sean came, too."

Pratson grew up with Noah's roommate, Sean, and the three decided to do a 700-mile bike ride across North Carolina to raise money for PORCH, a Chapel Hill-based non-profit that helps feed the hungry.

The scenery was good and the cause even better.

"It was pretty much a cool way to see the state," Pratson said. "I always kind of liked North Carolina and wanted to see a lot of different aspects of the state that you can't see driving through. PORCH is a great cause; a friend of mine founded it and just thought it would be a cool way to help out so I wasn't just sitting on my butt."

The journey started in Murphy and ended in Manteo. They average about 60 miles a day, finishing in about 12 days.

"I think the first couple of days were the hardest," Tobin said. "We had a ton of energy because we knew we wanted to do it. The mountains were just really tough. It was a struggle getting up and getting back on the bike when you had just spent 10 hours the previous day on the bike."
The mental challenge was even more difficult than the physical one.

"After those first few days when our excitement started to wear off, that's when we realized how much of a challenge it was but it was fun," Leesnitzer said. "We realized it was more of a mental thing than a physical thing, so we pushed each other throughout it all."

For the trio, the trip was a way to do their part to help during the COVID-19 pandemic.

"It means a lot," Tobin said. "We kind of just wanted to do it as a memory thing and then realized we could raise money for people in need and stuff. I thought that was a good idea. My favorite part was probably the beach at the end. Just hanging out in Manteo and knowing we had completed the mission."

The reward was worth the struggle.