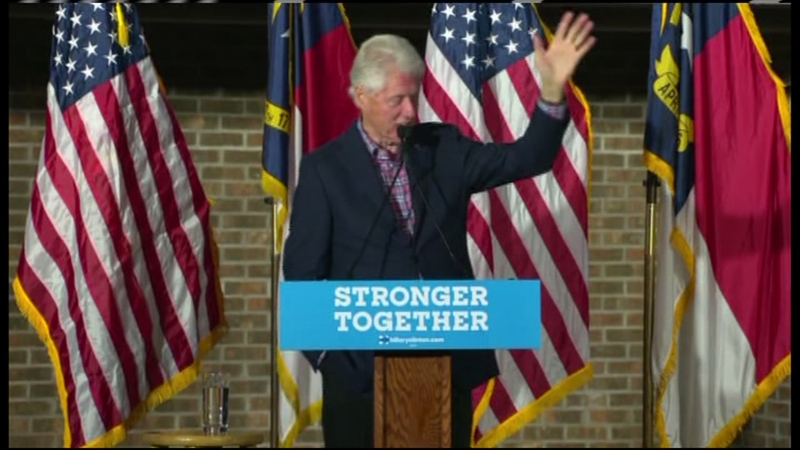 FAYETTEVILLE, NC (WTVD) -- President Bill Clinton wrapped up his tour of North Carolina Wednesday night with a stop in Fayetteville.

The 70-year-old former president looked a bit tired after days of campaigning for his wife, but right at home on the Fayetteville State campus.

Among his topics was North Carolina's controversial HB2 law, which he called "based on fear," and predicted the presidential vote in the Tar Heel State will be one of the closet ever.

Fans who turned out may like Hillary, but many came to see Bill.

"I am a big fan of his. I love him. I am just excited to meet him," said Jacklyn Romero.

Romero, a college sophomore, was among hundreds who lined up early for the Clinton rally. Many there are first time voters.

"You've got a chance to vote for somebody, in Hillary, that I have watched work for 45 years now," Clinton told them.

For a little over half an hour, Clinton touted his wife's experience as a lawmaker, and her life-long compassion for others. Clinton told the crowd Hillary is the answer American needs to be strong.

"She is the best change maker I've ever seen. That's what you need," he said.

As he did at previous campus stops in Wilmington and Robeson County, Clinton urged everyone to vote early and challenged young millennials and first-time voters to make a difference.

"You are actually being called upon - especially the young people - to define what it means to be an American in the 21st century," he said.

Before coming to Fayetteville, Clinton stopped at a storm shelter in Lumberton and met with flooding victims of Hurricane Matthew.