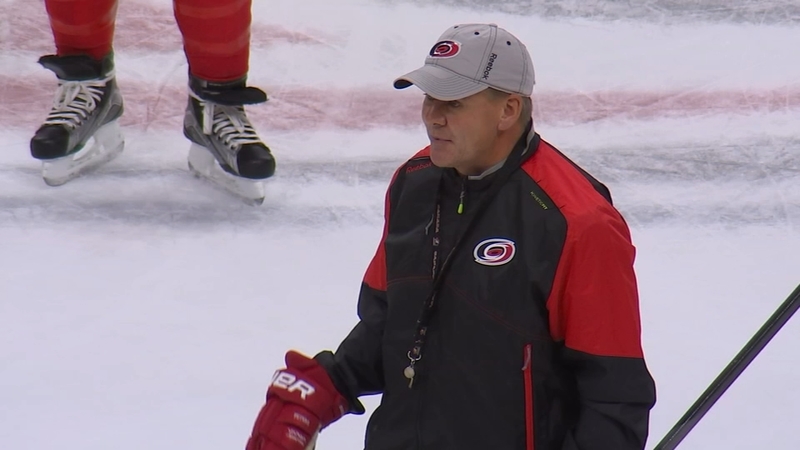 Bill Peters' status as the Calgary Flames coach - and whatever future he might have in the sport - have been placed into question while the NHL and the team investigate allegations he directed racist slurs at a Nigerian-born player in the minors 10 years ago.

Asking for patience, general manager Brad Treliving said Tuesday that Peters remains with the Flames after the allegations raised by Akim Aliu on social media a day earlier. Peters, who has not commented, stayed at the team hotel and was not with the Flames as they practiced for Wednesday night's game in Buffalo.

Aliu alleged Peters "dropped the N bomb several times towards me in the dressing room in my rookie year because he didn't like my choice of music." It happened during the 2009-10 season while the two were with the Chicago Blackhawks minor-league affiliate in Rockford, Illinois.

"Allegations of this nature, we take very, very seriously. This is subject matter that has no place in our organization," Treliving said. "Now it's my job to find out exactly what's taken place."

He said he had spoken with Peters and has had two conversations with Aliu by phone. Treliving offered no timeline and said he didn't know if Peters would be behind the bench against the Sabres.

The NHL called the alleged behavior "repugnant and unacceptable," but held off commenting pending further investigation.

Former Hurricanes defenseman Michal Jordan took to Twitter on Tuesday afternoon and detailed being kicked by Peters during a game and said that another player was punched in the head.

1) Never wish anything bad to the person but you get what you deserve Bill.After years making it to the NHL had experience with the worst coach ever by far.Kicking me and punching other player to the head during the game...

He told TSN that these were just two of multiple physical altercations between Peters and his players, all witnessed by teammates and Canes staff members, including then-assistant coach Rod Brind'Amour.

A Hurricanes source told ABC11's Mark Armstrong earlier Tuesday that the team's leadership group of players and some staff members went to then General Manager Ron Francis and told them of their concerns about Peters' behavior.

2) then pretending like nothing happened...couldnt believe my eyes what can happen in the best league.. happy that i dont have to go thrue that stuff on daily basics anymore.

Nothing ultimately happened, and in fact, Peters was given a two-year contract extension.

Francis is the GM of the new expansion franchise in Seattle and has yet to comment.

Aliu has not returned messaged left by The Associated Press, but he has since expanded on his allegations by telling Canada's TSN sports cable network that Peters made the remarks in Rockford's dressing room, calling out his choice of music with a brief tirade marked by profanities and the N-word in front of several teammates.

"He then walked out like nothing ever happened," Aliu said. "You could hear a pin drop in the room, everything went dead silent. I just sat down in my stall, didn't say a word."

Aliu referred to former San Francisco 49ers quarterback Colin Kaepernick as a reason he stayed quiet for so long. Kaepernick has spent the past two-plus seasons out of football since he began kneeling during the national anthem at NFL games to protest police brutality and racial injustice.

"This isn't to the degree of Kaepernick by any means, but if you play the race card, it's most likely the end of your career," Aliu told TSN. "This isn't me being bitter. I sat on this a really, really long time. It broke my heart. I think it made my career go downhill before it started."

Flames players were blindsided by the allegations against the second-year coach. Defenseman Oliver Kylington, whose mother is Eritrean and father Swedish, said Peters has always treated him fairly, and yet respected Aliu for voicing his complaints.

"If he felt like those words have been said, I really respect that he's speaking out," Kylington said. "Words like that should never, ever be said."

Flames captain Mark Giordano called it "a really tough situation" for the individuals involved and franchise.

Former #Canes player Michal Jordan confirms to #TSN that there were "multiple" physical altercations between coach Bill Peters and players in Carolina.

"He kicked me pretty hard in the back during a game," Jordan said. "Even the trainers and the other guys saw it."

"I think we all know there's no place for any of that sort of stuff in society, but also you have to respect that the allegations are just that right now, and you've got to go through the process," Giordano said, saying the team attempted to focus on having a good practice as they try to bounce out of a 1-5-2 slump.

Peters led the Flames to a Pacific Division-leading 50-25-7 record last year following four seasons coaching the Carolina Hurricanes. The 54-year-old made the jump to Rockford after leading the Western Hockey League Spokane Chiefs to a Memorial Cup championship in 2008.

Jordan: "I was at that point in my career, like I just got there, so I couldn't say anything. I didn't want them to think I was crying. Me and my agent, we kept it secret. Now other guys are speaking out, so I felt like I could."

Acknowledging he rebelled against Peters, Aliu said the coach eventually asked Blackhawks executives John McDonough and Stan Bowman to send him to a lower minor league level. The Blackhawks issued a statement saying nothing had previously been brought to their attention regarding Peters and Aliu before Monday. The team added it had no effect on any player personnel decisions involving Aliu.

Aliu played under Peters during the 2008-09 and 2009-10 seasons. He was demoted to the Toledo Walleye of the ECHL during the 2009-10 season. Aliu, who was born in Africa but raised in Ukraine and Canada, later played seven NHL games over two seasons with Calgary.

Honestly everyone think that I hate him after he went on tv and talked about me but he didn’t do anything to me personally. I’ve seen stuff like this but it’s up to the abused if he wants to share his story or not. https://t.co/t3AqwruxON

The 30-year-old Aliu has had a transient career since being selected by Chicago in the second round of the 2007 draft.

He's not playing this season after appearing in 14 games with Orlando of the ECHL last year. The Solar Bears were Aliu's 11th team over a six-year span, which included stops in Russia, Sweden and Slovakia.

Aliu's tweet came after reports surfaced of how poorly Maple Leafs coach Mike Babcock dealt with his players in Toronto before he was fired several days ago. Forward Mitch Marner confirmed that during his rookie season Babcock asked him to rank Maple Leafs players in order of hardest to least-hardest working. Babcock then shared Marner's list with numerous players.