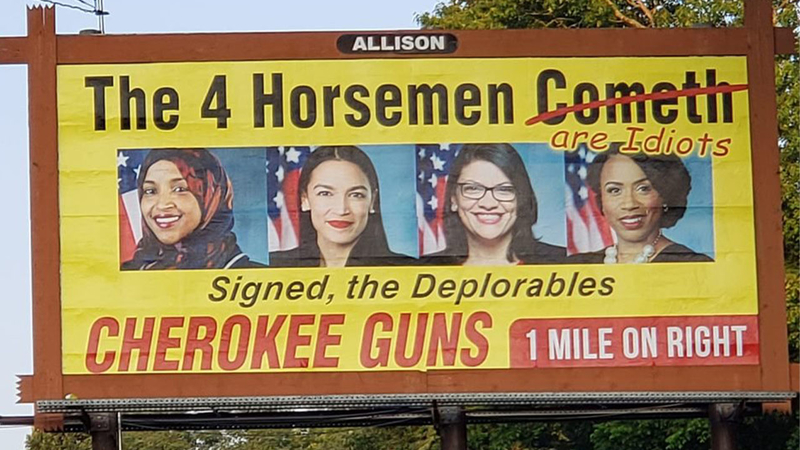 MURPHY, N.C. -- A billboard that sparked controversy in a small North Carolina town is coming down but not without a fight.

The sign, which was purchased by Cherokee Guns in Murphy, depicted Congresswomen Alexandria Ocasio-Cortez, Ilhan Omar, Ayanna Pressley and Rashida Tlaib as the Four Horseman of the Apocalypse.

Above their photos sat the phrase "The 4 Horseman Cometh;" however, the word cometh was crossed off and replaced with the words "are idiots."

On Wednesday, Allison Outdoor Advertising, the owner of the actual billboard, said the sign would be removed, WTVC reports.

Despite the company's decision, Doc, one of the sign's creators, said he stands by his decision even though he and his family are receiving death threats.

"The billboard has been driving business into our store," he said in a handwritten statement. "This was the main goal, as what any billboard is for! We give no apologies as we believe in our message (as many others do). The bottom line - this country will never be a Socialist country. I think President Trump will agree!"

Allison Outdoor Advertising told WTVC that it is "not in the business of upsetting people, and it's a shame it has come to this."

The billboard has become a conversation piece among the nation.

One couple who traveled from Georgia in support of the sign said removing it is a violation of the First Amendment.

While others weren't as supportive.

"This isn't cool," Patrick Miljour said, pointing at the billboard. "You know, those people are American. I'm American, you're American."