Video shows CA woman, 72, approach bison at Yellowstone before it charged, gored her

New video shows a 72-year-old California woman approaching close to a bison in Yellowstone National Park shortly before the animal charged and gored her.
KABC
By ABC7.com staff 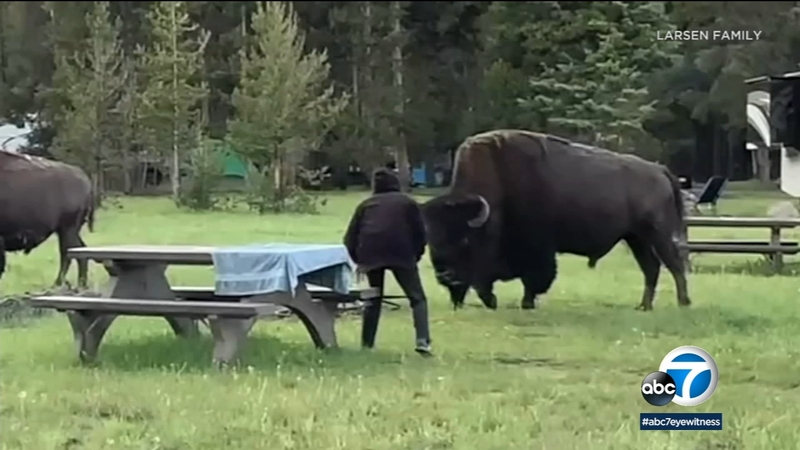 The video was shot by the Larsen family, who were in the camping spot next to the woman.

It shows two bison grazing close to a parked RV. The woman repeatedly approaches one animal, coming within at least 10 feet to take a picture.

That's when the bison charged at her, throwing her 10 to 15 feet up in the air.

When the woman stood up, the bison hit her again.

Park rangers treated the unidentified woman for multiple goring wounds before she was flown to an Idaho hospital. Information about her condition is not available.

Park officials say visitors should stay 25 yards away from large animals like bison, elk, bighorn sheep, deer, moose and coyotes and at least 100 yards away from bears and wolves.

"The series of events that led to the goring suggest the bison was threatened by being repeatedly approached to within 10 feet," Yellowstone's senior bison biologist Chris Geremia said in a statement released by the park.

"Bison are wild animals that respond to threats by displaying aggressive behaviors like pawing the ground, snorting, bobbing their head, bellowing, and raising their tail. If that doesn't make the threat (in this instance it was a person) move away, a threatened bison may charge," Geremia added. "To be safe around bison, stay at least 25 yards away, move away if they approach, and run away or find cover if they charge."

A 72-year-old California woman was gored by a bison in Yellowstone National Park, a news release from the park said.