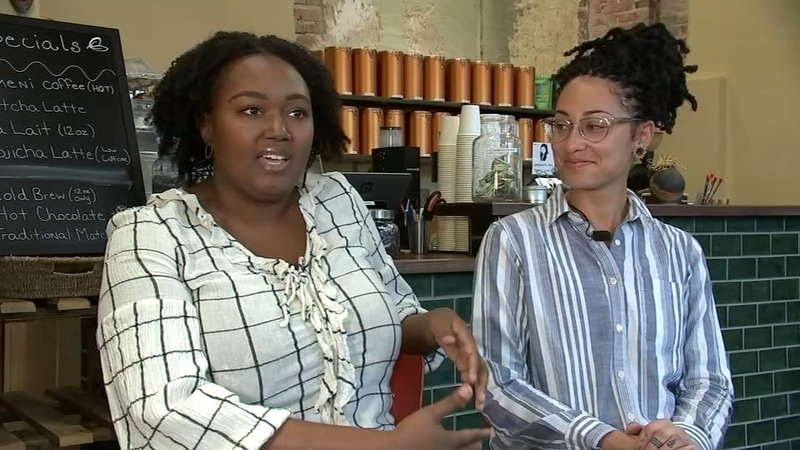 In Durham, black businesswomen are thriving

Megan George and Morgan Siegel are two women making their marks at the corner of Market and Chapel Hill streets near the Bull in downtown Durham.

Next door, Siegel is the owner of Jeddah's Tea, a tearoom specializing in organic, vegan-friendly teas from around the world.

"It's powerful to be right beside somebody who is also like myself. African-American business owner, female, doing something for her family -- just as I'm doing for mine," George said of Siegel.

"We have such synergy between our companies," Siegel said. "Her aesthetic is so gorgeous and beautiful and full and bright and green -- and mine is a little more grandma's house."

Can’t wait to introduce you to entrepreneurs Megan and Morgan. They are part of a new tide of black women-owned businesses setting up shop in downtown Durham. @theZenSucculent @jeddahstea sit next door to each other. Stop by for a visit. So glad I did. Tune in #ABC11 pic.twitter.com/dEt77qxlbW

The two friends are part of what researchers say is a national surge of black women owning businesses.

The 2018 State of Women-Owned Businesses report showed a 164 percent growth since 2007.

George and Siegel say black women often feel put in a box and not given the same opportunities to succeed. But they say programs and resources offered by the City of Durham, Self-Help and Downtown Durham Inc., have helped.

"Gentrification is real, and black businesses do get pushed out. But I think there are people in places of decision-making that are trying to bring black business back to the forefront," Siegel said.

"I don't think we could have done this or in this way, this quickly without that additional hand down for us," George said.

Their message to black women aspiring to be entrepreneurs: Overcome whatever fears you have and turn your passion and side-hustle into your 9-to-5.

"Don't be afraid to share that idea," George said.

She noted that aspiring entrepreneurs may fear their ideas may get taken and used. But she said that shouldn't hold them back.

"Share. Because that's how you filter your designs to your particular shop and your needs," she said.

"We each have something special to offer the world and I really encourage girls and young women to challenge that notion," Siegel stated. "I encourage my daughter who started her candle company. To really explore what she wants to do -- what makes her happy. If you can do what makes you happy to make a living you'll never be poor."
Report a correction or typo
Related topics:
businessdurhamentrepreneurshipsmall businessafrican americanswomen
Copyright © 2022 WTVD-TV. All Rights Reserved.
TOP STORIES
Out Raleigh celebrants react to possible SCOTUS actions
Biden signs landmark gun measure, says 'lives will be saved'
1 person dead after shooting in Durham
Trudeau: US abortion ruling could mean loss of other rights
Abortion rights supporters fill the streets of cities nationwide
Girl dies after being shot, Durham police investigating
Out! Raleigh Pride returns to Downtown
Show More
After abortion ruling, critics renew blasts at Sen. Collins
FBI seizes disputed Basquiat artworks from Florida museum
Where abortion rights stand in NC after Roe v Wade decision
Norway terror alert raised after deadly mass shooting
Hearing set for teen accused of killing, sexually assaulting girl, 10
More TOP STORIES News