Raleigh surgery center 'back in compliance' after investigation 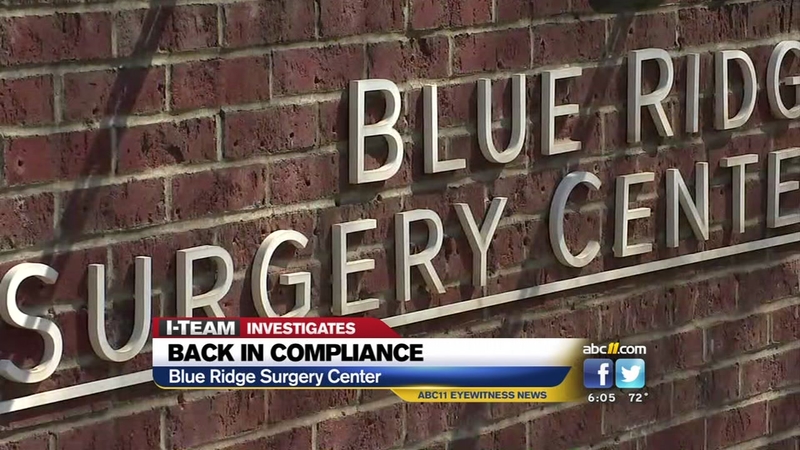 Surgical center back in compliance

RALEIGH, NC (WTVD) -- Blue Ridge Surgery Center is back in compliance with federal and state regulations after months of investigations resulted in threats to sever its Medicare coverage.

The ABC11 I-Team first reported on the surgery center, at 2308 Wesvill Court in Raleigh, after the first visit by investigators in January. They were conducted by the North Carolina Department of Health and Human Services on behalf of the Centers for Medicare and Medicaid, and came in response to complaints directly from patients.

The change in status means the managers and staff at Blue Ridge satisfied investigators' demands to improve performance in three areas: lax oversight by its managers, issues with pre- and post-surgery paperwork, and a lack of accountability when anything goes wrong.

"Our first priority is to protect the health and welfare of the patients," April Washington, a CMS spokeswoman, told the ABC11 I-Team. "CMS and the North Carolina State Survey Agency are working together to ensure the safety of all patients in this facility."

According to the initial 36-page report published in February, investigators had declared "an immediate jeopardy to the safety of patients as evidenced by a systematic failure to ensure thorough, accurate pre-procedure verification processes that opened the door for wrong surgeries to be performed. That includes the lack of site marks or review of relevant labeling of materials."

Officials returned to Blue Ridge several weeks later, and in a letter dated March 23, 2018, officials told Blue Ridge's administrators the center "remains out of compliance" with conditions for coverage. "A follow-up visit will be conducted," officials promised, noting a May 16 deadline for when Medicare/Medicaid coverage could be terminated.

Larry Richardson, Director of Nursing at Surgical Care Affiliates, Blue Ridge's parent company, had previously declined to answer any of the I-Team's questions but asserted in an emailed statement, "Blue Ridge Surgery Center's CMS license is active, which CMS can confirm. We have worked closely with CMS to ensure we have addressed all outstanding issues. All procedures and appointments are proceeding as scheduled. As always, our top priority is the health, care and safety of our patients."