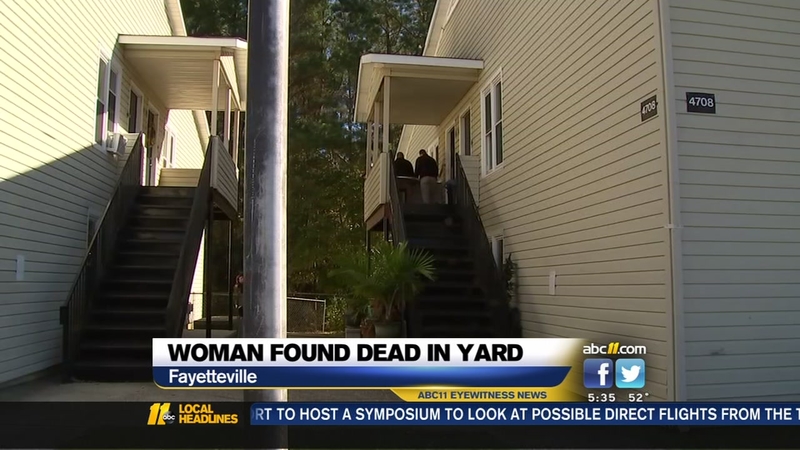 FAYETTEVILLE (WTVD) -- The Fayetteville Police Department is investigating after a woman was found dead outside of her residence.

Just before 7:30 Friday morning, officers were called to the 4700 block of Republican Road after receiving reports of a body found.

Reports show the body, belonging to an unidentified woman, was found outside of her home by a neighbor.

According to police, the woman fell two stories from her balcony.

The female was pronounced dead on scene; her body was sent to the Office of the Chief Medical Examiner to determine a cause of death.

Detectives with the FPD's Homicide Unit are investigating the death.

A man was brought in for questioning Friday afternoon but he was released.

-----------------------------
ABC11 has decided to slowly reduce the number of stories on the website that have a comments section. We believe very strongly that our audience should have an opportunity to discuss and debate events in our world, however, we have not been able to moderate the comments as well as we would like. Instead of hosting a platform that could allow a few loud and ugly voices to dominate a conversation, we want to encourage everyone to join us on our social media platforms and speak out there. Facebook: facebook.com/ABC11 Twitter: twitter.com/ABC11_WTVD
Report a correction or typo
Related topics:
fayettevillefayetteville police departmentfayetteville newsinvestigationbody found
Copyright © 2022 WTVD-TV. All Rights Reserved.
TOP STORIES
VP Harris tells Buffalo mourners: Stand up for what's right
Durham mother who founded anti-gun violence group loses second son
Woman gets 15 months in prison for punching flight attendant
Troubleshooter helps Cary woman get relief over return policy
I-40 west reopens in Johnston County after 6 car crash
Police inaction moves to center of Uvalde shooting probe
Victim found dead with gunshot wound in Durham crash identified
Show More
Jury's duty in Depp-Heard trial doesn't track public debate
Former Uvalde school teacher grieves for her mentor, students killed
RDU expects more traffic for Memorial Day weekend
Uvalde mass shooting spurs new debate over guns and mental illness
Wake County homes left damaged after Friday's severe weather
More TOP STORIES News