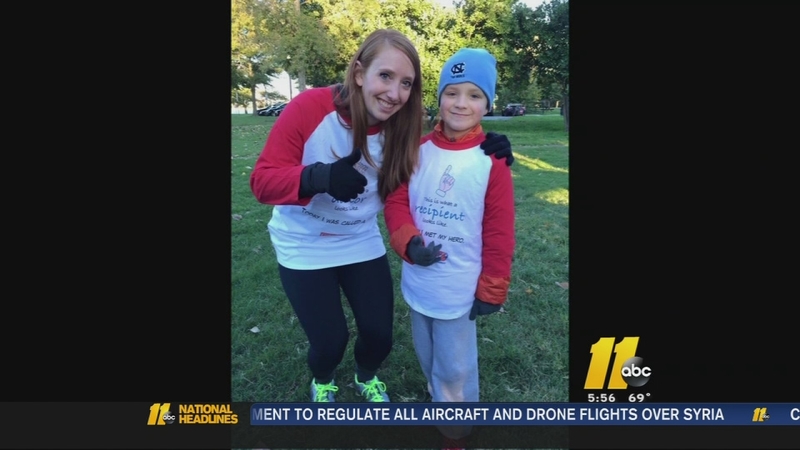 RALEIGH (WTVD) -- Twenty-five-year-old Ashley Lowe was excited to meet the 7-year-old boy she donated bone marrow for this past weekend at a charity walk hundreds of miles from her home in Raleigh - but she was even more excited and surprised to find out the boy and his family are practically neighbors because they live in Chapel Hill.

"It's such a crazy coincidence that we're both in an area that we can still see each other and hang out," Lowe said.

Lowe says the location is such a huge coincidence because she swabbed her cheek for a bone marrow registry drive back in her home state, Pennsylvania, and got the call to be a donor a year later. She was flown to Detroit, MI for the procedure and later moved to the Raleigh area before meeting the family at a charity walk and bone marrow donor meet-up in Washington DC.

Phineas Sandi is the Chapel Hill boy who was fighting leukemia before receiving Lowe's bone marrow. His mother, Kristina Sandi, says meeting Lowe for the first time was an emotional moment.

"She leaned in for a hug and she gave me a little hug, and when she went to pull away I didn't let go," Sandi said. "I just pressed harder, and I was of course crying, and I managed to whisper 'thank you'".

Ashley Lowe is the 25 year-old from Raleigh who donated bone marrow for 7 year-old Phineas Sandi of Chapel Hill. pic.twitter.com/zmFIgOcBmm

Sandi says Phineas is Leukemia free now, but that things were scary after her son's diagnosis. It wasn't the family's first go at battling the disease.

"We lost another child to cancer," Sandi said. "We had a daughter. Her name was Althea and she was 16 months when she was diagnosed with leukemia."

Althea lost her battle in 2006, when she was two years old after a bone marrow transplant failed to work.

"We were still hurting when we had Phineas," Sandi said. "And I just always had this feeling like once you know what it feels like to have your child die in your arms, you can go there. People always say 'Oh I can't imagine,' well I can imagine. It happened."

Phineas was 4 years old when he was diagnosed. Sandi says his chemotherapy failed to work.

"He started out as being high-risk and he went to very high-risk, and we were running out of options," Sandi said.

That's when they found out Lowe was a match. She says when she got the call to volunteer her cells she didn't think twice.

"I was mostly excited," Lowe said. "There was never actually a question about whether or not I would go through with it. I made that decision once I swabbed my cheek."

"I was just excited to be a small part in this really long, crazy story - I'm just giving them a small piece of hope," she said.

Lowe said meeting Phineas for the first time was an emotional experience and that she cried tears of joy.

"Just wrapping my head around the fact that two years ago I donated a piece of me to this little boy, and now coming two years later he received that transplant and had to go through so much just to get to this point, Lowe said.

"So I think just seeing him healthy, it's a good sort of cry, I think, that I had when I saw him - just so happy and overjoyed."

Lowe says she's excited to spend more time with Phineas now that she know he's so close, and Sandi says the bond that's been formed between the two goes way passed their shared cells.

"We're just really looking forward to her being a part of our family," Sandi said. "You know, way more than just blood."

Check out the Gift of Life Bone Marrow Foundation, that brought Ashley and Phineas together here.