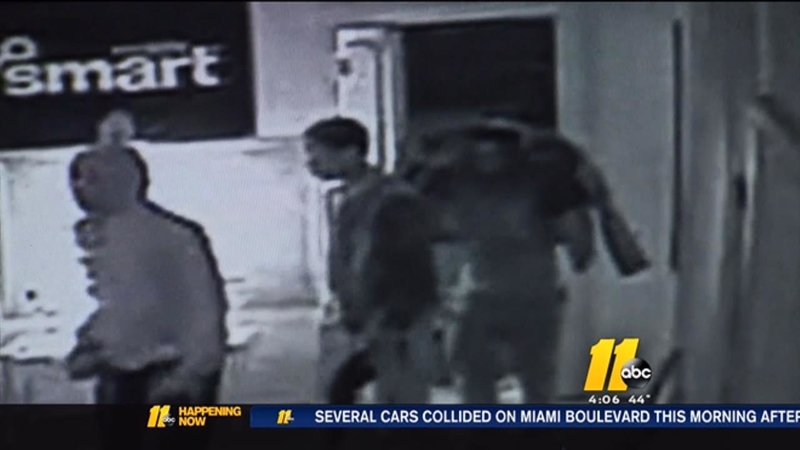 The video comes from the nine cameras that were rolling as the teens approached the Tech Boyz store at 2126 Hope Mills Road.

Around 3:30 a.m., the teens were seen casing the area, running away from the front door, and hiding in the bushes when cars passed. One of the teens broke through the store's front door window, reached in to unlock the door, and let the other four boys inside.

In less than a minute, the five teens go through the small tech store, stealing two laptops, several cell phones belonging to customers who had dropped them off for repair, and several miscellaneous items.

They're also seen on camera running quickly into the neighborhood behind the store once the security alarm sounds.

Hill said by 4:30 a.m., Fayetteville police notified his business partner, Dan Stevens, that the store had been broken into an hour earlier. The pair gathered the crystal-clear images, and Hill warned other nearby business owners about what happened.

A day later, the man who runs the "I Fix It" business off Brighton Road, was also robbed. It happened during the same early-morning hours Tuesday, and his surveillance shows the same five teens taking off with electronics, said Hill.

They all believe the teens are a part of bigger theft ring. Hill said the teens may have been in his store before, but they were definitely in the Brighton Road store prior to the Tuesday break-in. He said they were accompanied by an adult who was trying to sell that store owner something.

"It really messes with your privacy, because you don't feel safe anywhere you go," said Hill.

Hill and Stevens have invested in a huge safe, a louder alarm alerting them when a customer enters the store, as well as additional cameras. Stevens said the new cameras will be in color.

Stevens estimates at least a $3,000 loss from the damage, customer refunds, and extra security expenses.

"It puts us in a bind because we may have to raise prices, [and] we may have to change things we do," said Hill. "That hinders the customer, not only us. It hurts everybody."