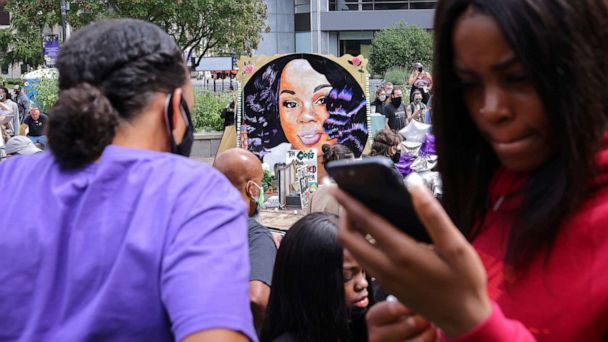 A Kentucky grand jury indicted former Louisville police officer Brett Hankison on three counts of wanton endangerment in the first degree in a shooting that killed Breonna Taylor, but neither he nor the other two officers involved in the fatal encounter were charged in her death.

The charges against Hankison, who fired 10 shots into Taylor's apartment, stem from the errant bullets that penetrated a wall of the residence and entered a neighboring apartment occupied by a child, a man and a pregnant woman, Kentucky Attorney General Daniel Cameron said at a news conference following the grand jury's announcement.

Cameron said that none of the shots fired by Hankison struck Taylor, a certified emergency medical technician.

The three charges against Hankison specifically state that "under circumstances manifesting extreme indifference to human life, he wantonly shot a gun into the apartment" occupied by Taylor's neighbors, according to Jefferson County Circuit Judge Annie O'Connell, who read the indictment in court.

Cameron said that since there was no surveillance video or police body camera video available, the sequence of events on the fateful morning had to be pieced together through ballistic evidence, 911 calls, police radio traffic and interviews.

Cameron said Taylor was shot six times, contradicting statements from lawyers for Taylor's family that she was shot eight times. He said ballistic evidence examined by the FBI showed that only one shot that hit Taylor was fatal, a .40-caliber bullet that was fired by Cosgrove.

The attorney general said Cosgrove fired 16 times into Taylor's apartment and that Mattingly fired six shots after they were fired on by Taylor's boyfriend, Kenneth Walker.

"Our investigation found that Mattingly and Cosgrove were justified in their use of force after having been fired upon by Kenneth Walker," Cameron said. "This justification bars us from pursuing charges in Ms. Breonna Taylor's death."

Hankison was booked at the Shelby County Detention Center in the Louisville suburb of Shelbyville at 4:30 p.m. and released at about 5 p.m. after posting $15,000 cash bond, a sergeant at the jail told ABC News.

If convicted, Hankison faces up to five years in prison, Cameron said.

Cameron said he spoke with Taylor's mother, Tamika Palmer, on Wednesday prior to the announcement of the grand jury's decision.

"Every day this family wakes up to the realization that someone they loved is no longer with them. There's nothing I can offer today to take away the grief and heartache this family is experiencing as a result of losing a child, a niece, a sister and a friend," said Cameron, who was appointed as a special prosecutor to investigate the case by Gov. Andy Beshear.

"The decision before my office as the special prosecutor in this case was not to decide if the loss of Ms. Taylor's life was a tragedy. The answer to that question is unequivocally yes," Cameron said. "There's no doubt that this is a gut-wrenching emotional case and the pain that many people are feeling is understandable."

Lawyers for Taylor's family reacted to the grand jury's decision with disappointment that none of the officers were charged in Taylor's death.

"This is outrageous and offensive to Breonna Taylor's memory. It's yet another example of no accountability for the genocide of persons of color by white police officers," the family's attorneys Benjamin Crump, Sam Aguiar and Lonita Baker said in a joint statement.

The attorneys said the charges against Hankison were related to him firing into the apartment of a white family, but noted that no counts were filed in relation to the shots fired into the residence of a Black family that lived above Taylor.

"This amounts to the most egregious disrespect of Black people, especially Black women, killed by police in America, and it's indefensible, regardless of how Attorney General Daniel Cameron seeks to justify it," the attorneys said.

During his news conference, Cameron did not mention shots being fired into the apartment above Taylor's residence and said he could only speak in "general teams about our independent investigation and findings."

Cameron said the investigation showed the officers were advised by their superiors to knock on Taylor's door in the early morning hours of March 13 and announce themselves. He said Cosgrove, Mattingly and Hankison had no involvement in the investigation nor in obtaining the warrant that led them to Taylor's apartment.

Cameron said an independent witness corroborated that the officers knocked on the door and announced themselves. "In other words, the warrant was not served as a 'no-knock' warrant," he said dispelling earlier reports that it was.

When no one answered, the officers breached the door.

"Sgt. Mattingly was the first and only officer to enter the residence. Sgt. Mattingly identified two individuals standing beside one another at the end of the hall, a male and a female," Cameron said. "In his statement, he said the male was holding a gun, arms extended in a shooting stance. Sgt. Mattingly saw the man's gun fire, heard a boom and immediately knew he was shot as a result of feeling heat in his upper thigh."

"There is no evidence to support that Sgt. Mattingly was hit by friendly fire from other officers," Cameron said, refuting a claim made in a civil suit filed by Walker. "Mr. Walker admitted that he fired one shot and was the first to shoot."

He said all of the officers had .40-caliber handguns and Mattingly was struck by a 9mm bullet matching the gun Walker was armed with.

Cameron said that in a "matter of seconds" Mattingly and Cosgrove, still standing in the doorway, returned fire. He said Hankison was posted outside a patio sliding glass door and fired multiple times.

The announcement was made more than six months after 26-year-old Taylor's death prompted nationwide protests with demonstrators coast-to-coast repeating her name and celebrities and professional athletes wearing clothes bearing her likeness.

The grand jury's announcement followed a $12 million settlement Taylor's family reached last week with the City of Louisville in a wrongful-death lawsuit Palmer filed in April.

Taylor's family had called for criminal charges to be filed against the three officers involved in the shooting.

Palmer said at last week's news conference that while "significant," the settlement was "only the beginning of getting full justice for Breonna.''

"We must not lose focus on what the real job is. And with that being said, it's time to move forward with the criminal charges because she deserves that and much more," Palmer said. "Her beautiful spirit and personality is working with all of us on the ground, so please continue to say her name.''

The settlement, which lawyers for the Taylor family say is the largest ever paid out for a Black woman killed in an alleged police misconduct case, also includes an agreement from the city to implement major reforms in the police department in hopes of preventing a similar tragedy from occurring.

The reforms include requiring the police department to overhaul how search warrants are obtained, and to create an Office of Inspector General to oversee an "early-warning system" that tracks use-of-force incidents and citizens' complaints in an attempt to weed out bad officers.

The warrant required the police to verify with postal inspectors that the ex-boyfriend was receiving packages at Taylor's address.

But lawyers for Taylor's family allege the affidavit used to secure the warrant contained lies and that the Louisville Postal Inspector denied that his office inspected packages sent to Taylor's home as part of a drug-trafficking investigation.

No drugs were found in Taylor's apartment, officials said.

Cameron said his investigation did not look into how the warrant was obtained. He said federal authorities are investigating that aspect of the probe.

Federal officials are also investigating if there were any civil rights violations stemming from the shooting.

Lawyers for Taylor's family said in their statement, "It is our hope that through the FBI's investigation, we will finally get the justice for Breonna that the Grand Jury refused her today."

Prior to the grand jury's announcement, many downtown Louisville business owners boarded up their windows and police beefed up their presence in the area. Police Chief Robert J. Schroeder issued a state of emergency for his department on Monday canceling time off and vacations for officers in anticipation of an update on the state investigation.

Protesters, dismayed by the grand jury's decision, took to the streets of Louisville, resulting in several arrests for failing to disperse.

Mayor Greg Fischer also signed two executive orders on Tuesday to prepare the city for Cameron's announcement, including a state of emergency order due to the potential of civil unrest that allows him to impose a curfew, ban on-street parking in the downtown area and restrict access to five downtown parking garages. The order also allows him to hire or contract services to boost security in and around Jefferson Square Park in the downtown area.

"Our goal is ensuring space and opportunity for potential protesters to gather and express their First Amendment rights after the announcement," Fischer said in a statement. "At the same time, we are preparing for any eventuality to keep everyone safe."

Mattingly, Hankison, Cosgrove and Jaynes were placed on administrative reassignment pending the results of an investigation.

Hankison was later fired for his role in the incident. According to his termination letter that was shared with local reporters, Hankison violated police department procedure when he fired 10 rounds into Taylor's apartment while executing the warrant.

During a news conference Wednesday afternoon, Fischer said the grand jury's conclusions "confirmed our decision to terminate Hankison" on June 23.

"Hankison's actions displayed an extreme indifference to the values of human life," Fischer said. "His actions brought discredit upon himself and the department. His conduct demanded termination."

Asked if the outcome of the grand jury justified settling the lawsuit with Taylor's family, Fischer said the settlement was necessary to "begin the healing" in Louisville and reform the police department from top to bottom.

"I know there are people in our community who feel that these charges fall short of achieving justice. So a few reminders: the case is far from over," Fischer said, referring to the FBI investigation and an internal affairs probe by the police department.

Louisville Metro Police Department told ABC News that the actions of a total of six officers involved in the Taylor case are being reviewed as part of an internal investigation.

The department's Professional Standards Unit has begun its probe into Cosgrove, Mattingly, and Jaynes, as well as detectives Tony James, Michael Campbell and Michael Nobles, according to Sgt. Lamont Washington, a spokesperson for the agency.

On Monday night, Mattingly sent an email to his police department colleagues expressing support for them having to work in these difficult times.

Mattingly added, in part, that regardless the outcome of the grand jury hearing, "I know we did the legal, moral and ethical thing that night."

"It's sad how the good guys are demonized, and criminals are canonized. Put that aside for a while, keep your focus and do your jobs that you are trained and capable of doing. I'll be praying for your safety," Mattingly wrote. "Remember you are just a pawn in the Mayor's political game. I'm proof they do not care about you or your family and you are replaceable."
Report a correction or typo
Related topics:
abc newsnational
Copyright © 2020 ABC News Internet Ventures.
More Videos
From CNN Newsource affiliates
TOP STORIES