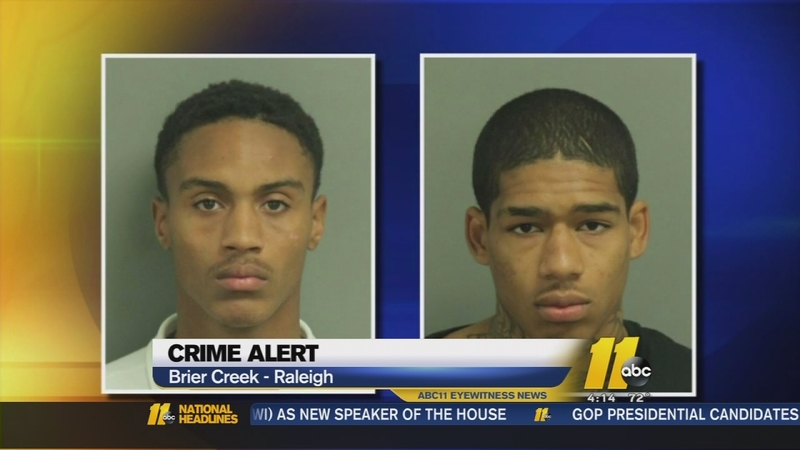 RALEIGH (WTVD) -- A Brier Creek couple say they are relieved after police said they've tracked down two of the three men who carjacked them at gunpoint.

Marshall Beach told ABC11 that he and his wife had just pulled in the driveway of their Brier Creek home late last Thursday evening after eating dinner in downtown Raleigh when he said three men wearing all black, ski masks, and carrying guns showed up seemingly out of nowhere.

They forced the couple to turn over their belongings then took the keys to their Infiniti convertible.

At one point, Beach said one of the men indicated he wouldn't hesitate to use his weapon.

"He threatened that if I didn't get down he would shoot my wife," Beach said. He added, "But it happened for me too fast to be scared. We were scared after it was over."

Police have so far charged two in connection with the crime and one is just a teenager.

Deviun Robinson of Raleigh is the latest to be arrested. The 16-year-old is charged along with 21-year-old Aaron Rivera of Raleigh with armed robbery and conspiracy.

Rivera is also charged with possession of the couple's stolen car which was recovered.

Beach said investigators have told him that one of the suspects confessed saying they saw the couple driving outside of Brier Creek, decided they wanted the car, and then tailed them.

"We feel a little bit better now that it appears that it was random, that they just followed us home because they wanted the car as opposed to something that was planned or that we had been targeted or something like that," Beach said. "It's scary but, my wife in particular was very frightened and I think she feels a little bit better about it now."

The third suspect has not been identified and is still on the streets.

Raleigh police said they are hoping someone can provide them a lead so they can get the other man off the streets before someone else is confronted with a gun.