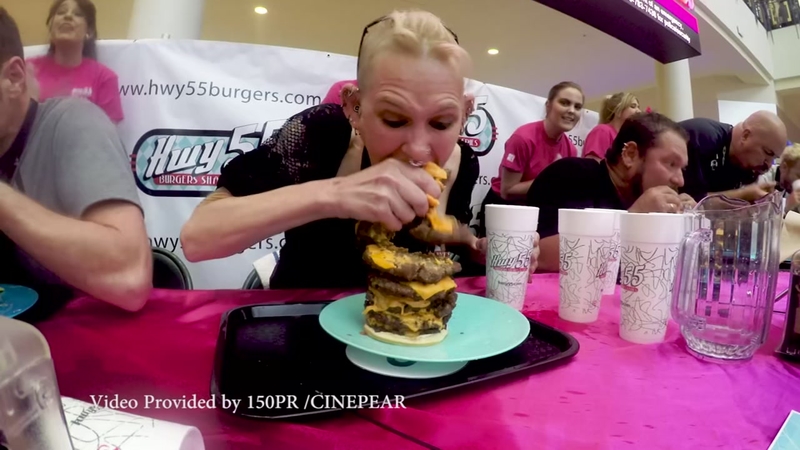 RALEIGH: N.C. (WTVD) -- Imagine trying to accomplish a hard task in 1 minute and 25 seconds. Think about it - can you read a book, get the kids to settle down, take a shower, or adequately brush your teeth? Probably not.

Now, imagine eating a burger stacked seven patties high (3.5 pounds of ground beef) in 85 seconds - most people can't even hold their breath for that long!

Well, that's what Molly Schuyer did this past weekend during Hwy 55's "55 Challenge" in Raleigh.

The mother of four was already ranked the number one independent competitive eater in the world and now, she's topped her own record.

During the contest, the Sacramento resident beat out 12 other contestants, by downing her stack of seven patties - 55 ounces of ground beef - in 1 minutes 25 seconds - shaving 12 seconds off of her previous record.

Pretty impressive for someone who only weighs 100 pounds.

Schuyler won more than just recognition, she got a $2,500 prize.

And Hwy 55 said they have no beef with Schuyler beating her own time.

"We have just witnessed the most amazing eating exhibition in history," said Hwy 55 president Kenney Moore, who founded the brand 27 years ago and flipped every burger in the brand's first two years. "Our 55 Challenge is important to the brand despite its 90 percent fail rate. It is not meant for the weary kind or faint of heart or belly. Molly is the brand's biggest fan and the most spectacular eater phenom in the world. She simply continues to amaze."

So, how does one prepare for such a task?

"I haven't slept for four days and haven't eaten in three," Schuyler said before the competition. "But Hwy 55 is like family to me. And when I get in a zone, I stay in it until I do what I came to do."

At any of Hwy 55's 137 locations, guests can take the 55 Challenge themselves.

If they can consume seven patties and at least four trimmings on a bun with fries and a 24-ounce drink in 30 minutes, their meal is free and their name goes on the company's website for bragging rights.