Lumberton woman ends up with 2 security contracts, says she was misled 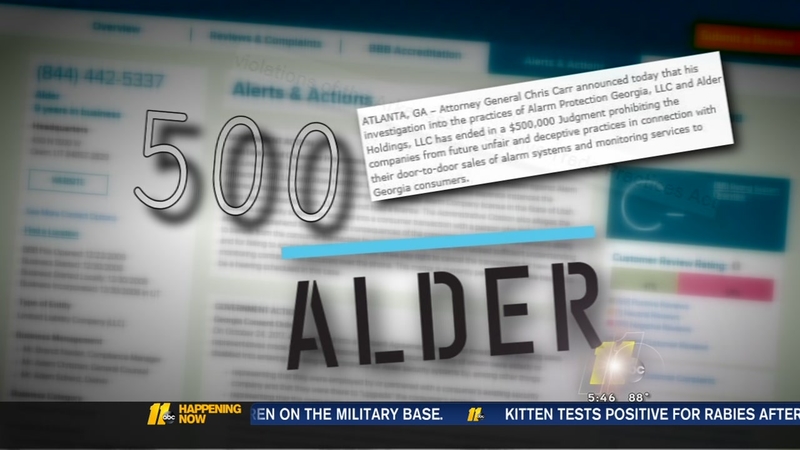 LUMBERTON, NC (WTVD) -- It started with an unexpected knock at the door and ended with Patsy Redish under contract with two different security companies.

Patsy said a technician with Alder Security was the unexpected knock at the door. "We are updating your equipment. We are taking over the accounts because it's more of a local company than yours," she said she was told.

Patsy said the updated system would cost her more money each month; she was currently only paying $29.99 a month with the security company she said she's been with for the last 10 years.

"He said that the reason it was gonna go up was because they were gonna get more digital, up-to-date equipment," she said.

Patsy said the Alder representative took down all of her old security equipment and put up his new equipment.

She said the representative had her answer questions on his laptop afterward.

Patsy said the representative assured her everything was going to be fine and to just answer yes to the questions.

A few weeks later, Patsy realized a big problem when she checked her bank account. She saw the monthly charges from the security company she had for the last 10 years, plus for Alder services.

She called her original security company, and she said that's when they told her no one was updating her equipment or taking over their company, and that Patsy was still under contract with them despite the equipment taken down.

Patsy said she then called Alder and said, "You led me to believe that y'all were taking over this area. I would not have changed to an almost double amount when my company I been with them for so long."

Patsy said a representative for Alder assured her they would pay off the contract with her original security company and lower Alder's monthly payment to $29.99 a month.

"I waited a week or two, nothing. I called, left a message, never called me back," she said.

Patsy is not alone.

More than five hundred customer complaints have been filed with the Better Business Bureau.

As for Patsy, she got ABC11 involved, and I reached out to Alder.

They provided this statement:

"In reviewing the Welcome Survey with Mrs. Redish recorded at the time of sale, she clearly agrees that she understood the Alder representative presented himself as a representative of Alder, including wearing his Alder shirt and ID badge, when he made contact with Mrs. Redish. We take customer service seriously and make every effort to ensure each of our customers are satisfied with the services we provide. We have spoken to Mrs. Redish and the misunderstanding has been resolved to her satisfaction. We are pleased that she is remaining an Alder customer and look forward to providing her with exceptional service for many years to come."

After my involvement, Patsy said Alder sent her a check to pay off the remaining balance with her former security company, reimbursed her for all of the double payments she made when she had both security contracts, and lowered her monthly payment to $14.99 a month.

Plus Patsy said Alder made her contract month to month instead of five years.

She said she is very satisfied but added that she has learned her lesson and will read everything before she signs off on anything.

If anyone shows up at your door offering services or claims they want to upgrade your current service, before agreeing to anything, it's wise to call the company directly yourself, so you know exactly what is going on.
Report a correction or typo
Related topics:
businesslumbertonmoneytroubleshooterscam
Copyright © 2021 WTVD-TV. All Rights Reserved.
TROUBLESHOOTER
Watch out for scammers posing as your favorite Instagram accounts
Troubleshooter helps worker told she'd have to pay back $8k in unemployment
Durham couple charged for COVID test: How to avoid it happening to you
Don't fall for these scam voicemails trying to trick you out of money
TOP STORIES
Sheriff confirms body found in Sampson County is missing woman
NOAA updates Atlantic hurricane season forecast
LATEST: 72K kids in US tested positive for COVID-19 last week
Teens may soon lose ability to decide if they want COVID-19 vaccine
Durham police seek info after man found stabbed to death in home
SC mom on ventilator after getting COVID-19 at 37 weeks pregnant
Show More
Simone Biles reveals aunt died suddenly 2 days before competition
$1.5M Raleigh home goes viral for Star Wars-themed movie theater
UNC police audit alleges actions conflicted with school policies
Wake school board votes to mandate masks for upcoming semester
As eviction crisis plays out in Raleigh, CDC issues new moratorium
More TOP STORIES News