North Carolina workers demand a minimum of $15 an hour 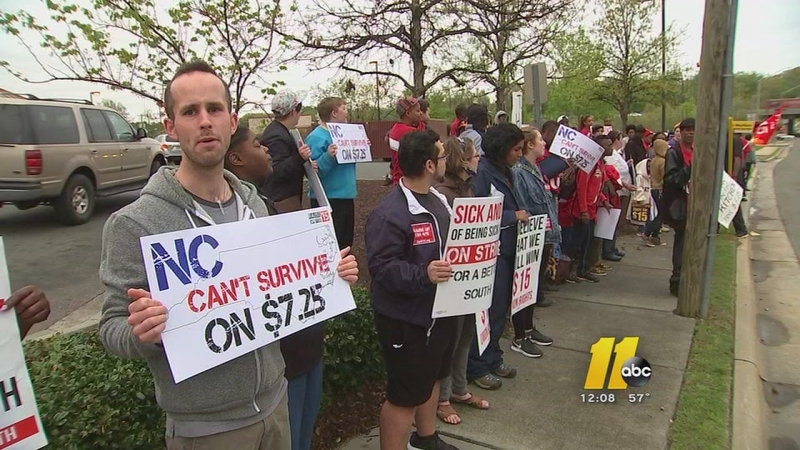 North Carolina workers demand a minimum of $15 an hour

DURHAM (WTVD) -- In protests across the Triangle Wednesday, fast-food employees and other workers demanded their minimum pay be raised to $15 per hour.

In Durham, dozens made plenty of noise as commuters drove by a McDonald's on Roxboro Street during the morning commute.

"Hold your burgers, hold your fries! Make your wages supersize!" was one of the chants.

The protests were part of the national "Fight for $15" movement. Workers said they chose Tax Day because they want to highlight that they are paid so little that many are forced to rely on public assistance to get by.

"People should be able to work for a minimum wage which allows them to pay enough bills, so they can survive in our society," said child care worker Mary Grace.

Getting by is tough for home care worker Denise Rush - who has six kids and makes less than $10 an hour.

"We need an increase, those of us taking care of families. Not to just strive, but survive," she said.

Nationwide, organizers called the demonstrations the biggest ever mobilization of workers in U.S. history. The campaign is being spearheaded by the Service Employees International Union and began in late 2012. Protests for higher pay and union for low-wage workers are planned for more than 230 cities and college campuses Wednesday.

In New York City, protesters rallied outside a McDonald's early Wednesday morning and were planning more demonstrations throughout the day.

Kendall Fells, organizing director for Fight for $15, said McDonald's remains a focus of the protests and that the company's recently announced pay bump shows fast-food workers already have a de facto union.

"It shows the workers are winning," he said.

McDonald's earlier this month said it would raise its starting salary to $1 above the local minimum wage, and give workers the ability to accrue paid time off. It marked the first national pay policy by McDonald's, and indicates the company wants to take control of its image as an employer. But the move only applies to workers at company-owned stores, which account for about 10 percent of more than 14,300 locations.

That means McDonald's is digging in its heels over a central issue for labor organizers: Whether it has the power to set wages at franchised restaurants.

In an emailed statement, McDonald's said it respects the right to "peacefully protest" and that its restaurants will remain open Wednesday. In the past, it said only about 10 to 15 McDonald's workers out of about 800,000 have participated.

In a recent column in The Chicago Tribune, McDonald's CEO Steve Easterbrook described the company's pay hike and other perks as "an initial step," and said he wants to transform McDonald's into a "modern, progressive burger company."

But that transformation will have to take place as labor organizers continue rallying public support for low-wage workers. Ahead of the protests this week, a study funded by the SEIU found working families rely on $153 billion in public assistance a year as a result of their low wages.

Already, organizers say the Fight for $15 is changing the way people think about low-wage work.

Last year, more than a dozen states and multiple cities raised their minimum wages, according to the National Employment Law Project. Wal-Mart Stores Inc., which has also been targeted with protests for higher wages and better treatment for workers, also recently announced pay hikes.

"People are beginning to wonder if they'd be better off with bargaining power," Reich said. 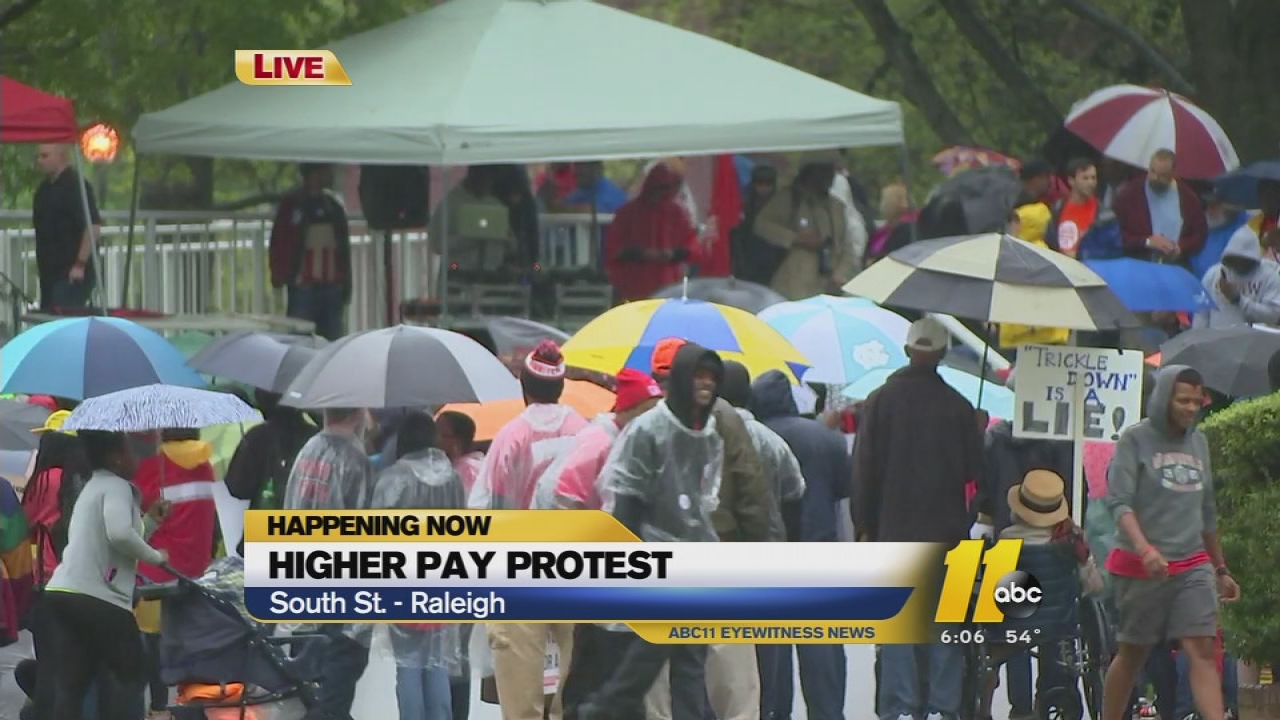 Fast food workers, activists, and college students also showed up at Shaw University Wednesday afternoon for a "Fight for $15" demonstration.

George Hargrove, from Durham, has been working McDonald's. He says in 12 years under the Golden Arches, he's seen little movement in his paycheck.

"It's very frustrating. It's very upsetting to know that I work so hard and not to receive a good wage," said Hargrove. "It's very, very hard to even just maintain everyday life, just getting to work."

College students from throughout the state attended the demonstration. They took buses from Chapel Hill, Fayetteville, and beyond.

Shaw Student Hakeem Dykes helped organized the rally. He says there was an overwhelming response from students who wanted to get involved in the movement demanding better wages.

"These are the people who are making our lives better, so why not make their lives better so when they come to work they feel proud of what they're doing," said Duykes.