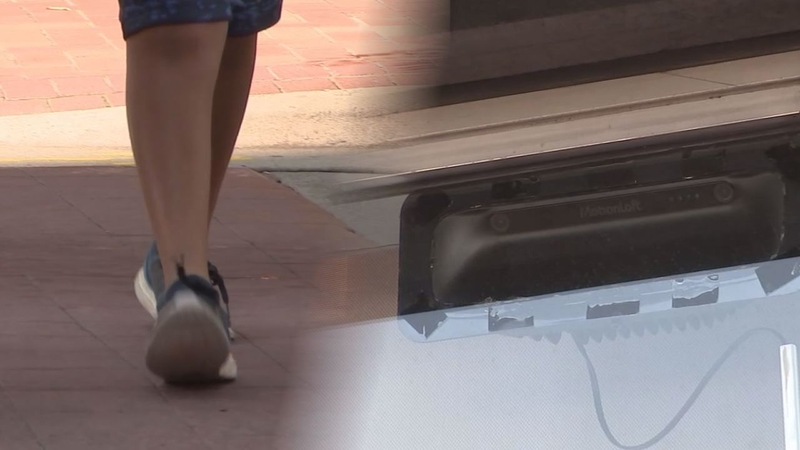 DURHAM, NC (WTVD) -- Should you decide to take a stroll along Main Street in downtown Durham, eyes will be on you; well, not you specifically, but your presence.

A project by Downtown Durham Incorporated has been counting pedestrian traffic since November 2017.

Sensors were placed above the clothing store Vert & Vogue in Five Points and in the Chesterfield building at Duke and Main Streets. In June, both locations saw between 900 and 1,400 people a day, respectively, walk past each location. A third camera was added in early June at 21C Hotel and has seen 2,750 people walk by a day.

Matt Gladdek, who's behind the project, called the information collected, "baseline data to see how development will change these areas with increased traffic." In other words, DDI is keeping track of how many people walk around in downtown Durham, at what time, and when. In addition, Gladdek said the numbers are averages because the sensors only count pedestrians on one side of the sidewalk.

The sensors were created by a company called Motionloft, based out of San Francisco. Counting has also been successful in other cities such as Las Vegas and New Orleans. The cost of the cameras is $3,600, which includes installation and delivery.

So what happens with the information? Gladdek said currently the information is provided to commercial brokers so that future or potential tenants will have a general idea of the parts of downtown Durham that are heavily traveled. However, he said, the data will not predict what landlords will begin charging for rent. "Market will dictate what cost is," Gladdek said. "It will have a direct impact on businesses choosing on picking particular properties, especially small retailers."

The information will also be helpful once Brightleaf's current mixed-use development opens in either spring or summer 2019.

"It lets you know that we are having growth. And that the community is growing. Again, that we have a big brother watching us. But I don't think anything's wrong with it," said Connie McMillon, construction worker.

Gladdek has called DDI's pedestrian counters a "pilot project for now". Vert & Vogue, The Chesterfield building, and The 21C Hotel have all opted for a five-year contract, with the option to renew or replace if they find the data to be useful. Gladdek also said other locations could be added, but did not specify where.

"People want local retailers to have a heavy presence downtown," Gladdek said. "People have made it very clear they don't want (national) chains."

DDI belives the information will be helpful for existing businesses in how they determine their hours of operations. For example, if a business closes at 6:00 p.m., yet foot traffic increases after the store closes, Gladdek said that may be reason for them to adjust their hours.
Report a correction or typo
Related topics:
businessdurhamtechnologydurham county news
Copyright © 2021 WTVD-TV. All Rights Reserved.
TOP STORIES
Hottest temperatures of the year begin today
McCormick spices recalled due to salmonella risk
CDC reverses course on indoor masks in some parts of US
Simone Biles withdraws from all-around competition at Summer Games
Some Wake parents OK with masks as long as kids can be in class
Why this Haitian restaurant relocated from Brooklyn to Edgecombe Co.
Show More
Man convicted of killing USC student who mistook his car for Uber
LATEST: Cooper to 'review changes to CDC guidance'
800K COVID-19 vaccine doses in NC could expire by end of August
As COVID-19 cases surge, nervous parents prepare for school year
1 dead in movie theater shooting during showing of 'The Forever Purge'
More TOP STORIES News