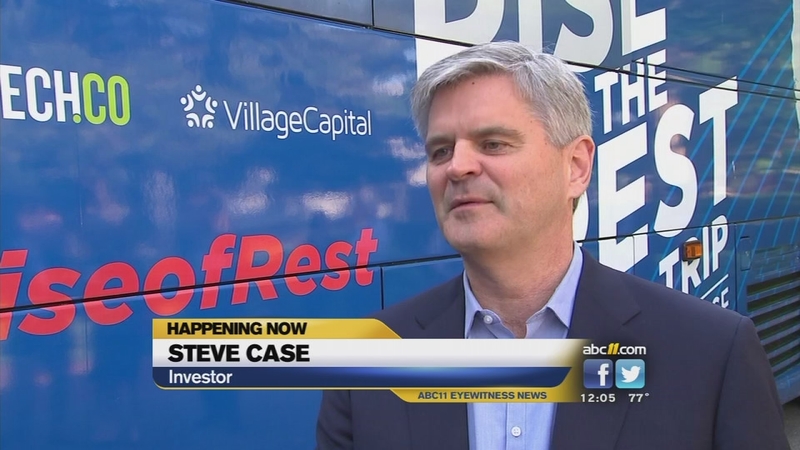 RALEIGH-DURHAM (WTVD) -- A legend in the tech world visited several local Triangle start-ups on Tuesday to talk about opportunities for entrepreneurs, which included a chance at a $100,000 investment.

The co-founder of AOL, Steve Case, is on a 5-state "Rise of the Rest" tour, looking for opportunities to invest thousands of dollars in local companies with a marketable idea.

"I think the Triangle is certainly on the rise, and in good company with the rest of the cities here," said Adam Klein with American Underground.

Case boarded his tour bus and headed to his first stop at American Underground's Raleigh location, a tech hub with two locations in Durham and one in downtown Raleigh, after breakfast at the Governor's Mansion with business and civic leaders.

"What I'm trying to do with this 'Rise of the Rest' stuff is make sure entrepreneurs who have similar dreams have the opportunity to have those dreams come to life, wherever they happen to be," Case said.

The investor found several in our area.

"In the last few years, we've seen an explosion of opportunities for young entrepreneurs in the co-working spaces, in the downtown areas," said Joan Siefert Rose with the Council for Entrepreneurial Development.

"I make a $100,000 personal investment in each of the winners, then we invite them to a national competition," he said.

Jenny Bonchak, who owns one of the start-ups Case toured in Raleigh on Tuesday, said the value of a chat with him was priceless.

"He chose to be in Raleigh today and he chose to talk to those of us who put it all on the line to do our own thing, and it's really special to have him here to support us," said Bonchak, owner of Slingshot Coffee.

Tuesday's competition tour wraps up at the Carolina Theater in Durham at 3 p.m. with the announcement of who will be awarded the $100,000 investment. The winner goes on to compete in the national round.