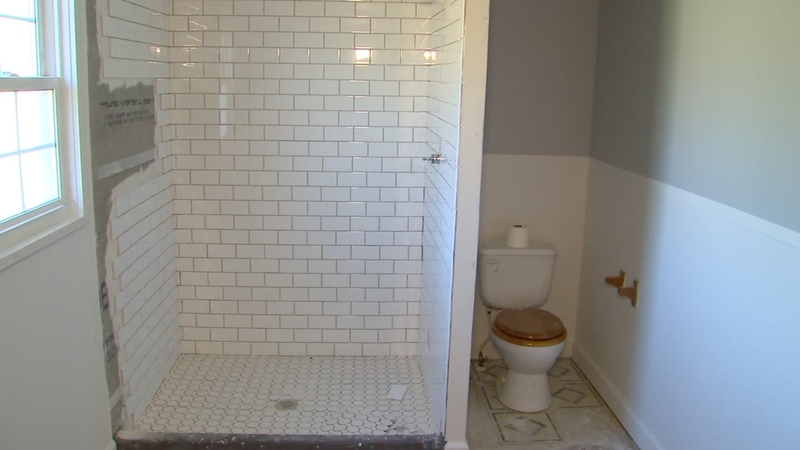 JOHNSTON COUNTY, N.C. (WTVD) -- It was supposed to be a bathroom remodel job that would help a Johnston County couple. Instead, Barbara Bunn says it's been one frustration after another, and she's been left with an unfinished job.

Barbara's husband was disabled and she desperately needed her bathroom remodeled so she could take him to the bathroom and help him shower.

She signed a contract in July with Stephen D. Strader of Rejuvenate Restorations and Co. for the bathroom model. Six months after signing the contract, the job is still not done.

"He was supposed to finish painting, put in a vanity, trim the door out," Barbara said. In addition, the tile in the shower is only halfway done, and she said there are problems with that. "He didn't seal the backboard just glued the tiles to it," she added.
Barbara and Strader even exchanged text messages several times throughout the job. She said after weeks of him not showing up she gave him a deadline. "I want this done. It has to be done, and he said I will get to it, give me two and a half weeks."

That deadline came and went and Strader had $6,000 of Barbara's money. "I finally said you need to finish the job or give me my money back. He offered to give me my last payment which was $4,000," Barbara added.

The refund did not happen, and Barbara said Strader insisted he would finish the job.

"He came back and worked two hours and did a little repair over here. I haven't seen him since November. The least he can do is mail me my key, he doesn't even need to come see me, and he can just mail me my key. I don't feel comfortable with him having my key," said Barbara.

Sadly Barbara's husband passed away during these frustrations.

I got a hold of Strader on the phone. He said when it comes to a key, Barbara could change her locks and send him the bill. When it comes to the work not done, he said Barbara was hard to work with, but he will make it right, but he just hasn't had time to yet. After my call with him, Strader did send Barbara an explanation that said this in part:
"We offer our condolences upon hearing of the death of your husband. We will be happy to return your home key to you. As far as the refund is concerned, we will return to you a refund of $1,100. However, the refund amount of $1,100 will only be issued to you from Rejuvenate Restorations and Co. if no story is released about our company, or anyone associated with our company, either publicly on any news station or through any form of social media or petition, etc.
Those are our terms for settling the disagreement involving our contract, signed on July 2, 2018, regarding your bathroom remodel. Please let us know your decision.

Barbara said she's owed more than the $1,100 and she's moving forward with the story. "I don't want it to happen to anyone else, especially in my situation."

While Barbara has yet to get any money refunded from Strader, he did send back her key.
Report a correction or typo
Related topics:
businessjohnston countybusinesslost moneytroubleshooter
Copyright © 2021 WTVD-TV. All Rights Reserved.
TROUBLESHOOTER