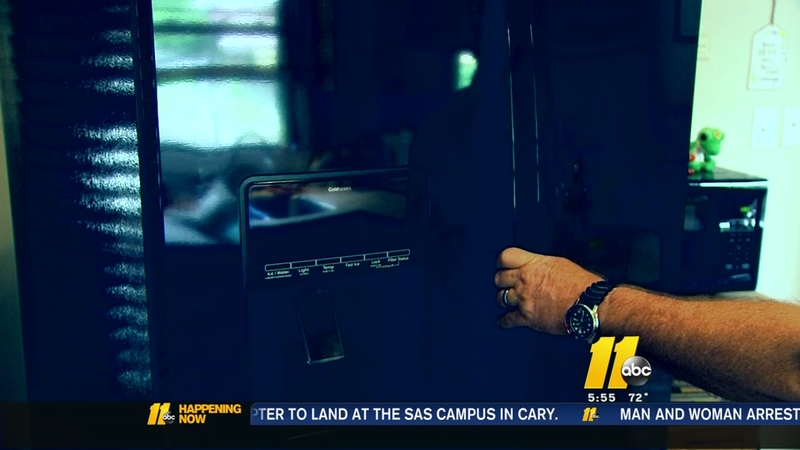 Troubleshooter saves the day for Raleigh man struggling with repairs

RALEIGH, NC (WTVD) -- When it comes to repairs on your appliances, how many do you have to go through until you say enough is enough?

For homeowner James Caudle, he said he's had enough, and just wanted a solution to his refrigerator that he said wouldn't keep things cool.

He bought the refrigerator three years ago from Home Depot and he also bought an extended warranty on the appliance.

He said the beginning of this year there was a problem keeping the items inside the refrigerator cool. "The drinks were cool but not cold enough, the milk was warm, the vegetables were wilting," he added.

James said the extended warranty company did send a technician out.

"They came out and diagnosed it was a damper door that wasn't working," he said.

James said that part was replaced, but things didn't stay cool for long, which then led to another repair. He said more parts were replaced, and then the problem happened again.

"Not cooling any better so I called them again," said James.

Once again a repairman came out, but James said the technician didn't find a problem.

James took matters into his own hands and bought an infrared temperature gun.

You can see in the video James took that the temperature with the gun displays temperatures above 40 degrees, with the highest reading being 47.9 degrees.

James said there was yet another visit from the repairman.

"He told me everything was working fine," he said.

James said he was frustrated because under the extended warranty, there is a no-lemon policy that states a unit qualifies for replacement or refund after three failed repairs for the same issue.

James said he felt his refrigerator qualified, but said Home Depot just wanted to continue trying to repair it.

So he got in touch with me.

"I knew for a fact that you would get things done," he said.

Thanks to Home Depot working with us, things did get done.

They reached out to James and gave him a $2,000 refund which was the full price he paid three years ago for the refrigerator.

James was very happy with that resolution, and used that money to buy a new refrigerator that he said is keeping things nice and cool.

As for Home Depot, they provided this statement, "We apologize to the Caudles for the issues with their refrigerator and we're glad we could get this resolved."

The best advice is to keep track of all repairs.

Home Depot added that a unit qualifies for a replacement or refund under the no-lemon policy after three failed repairs for the same issues.