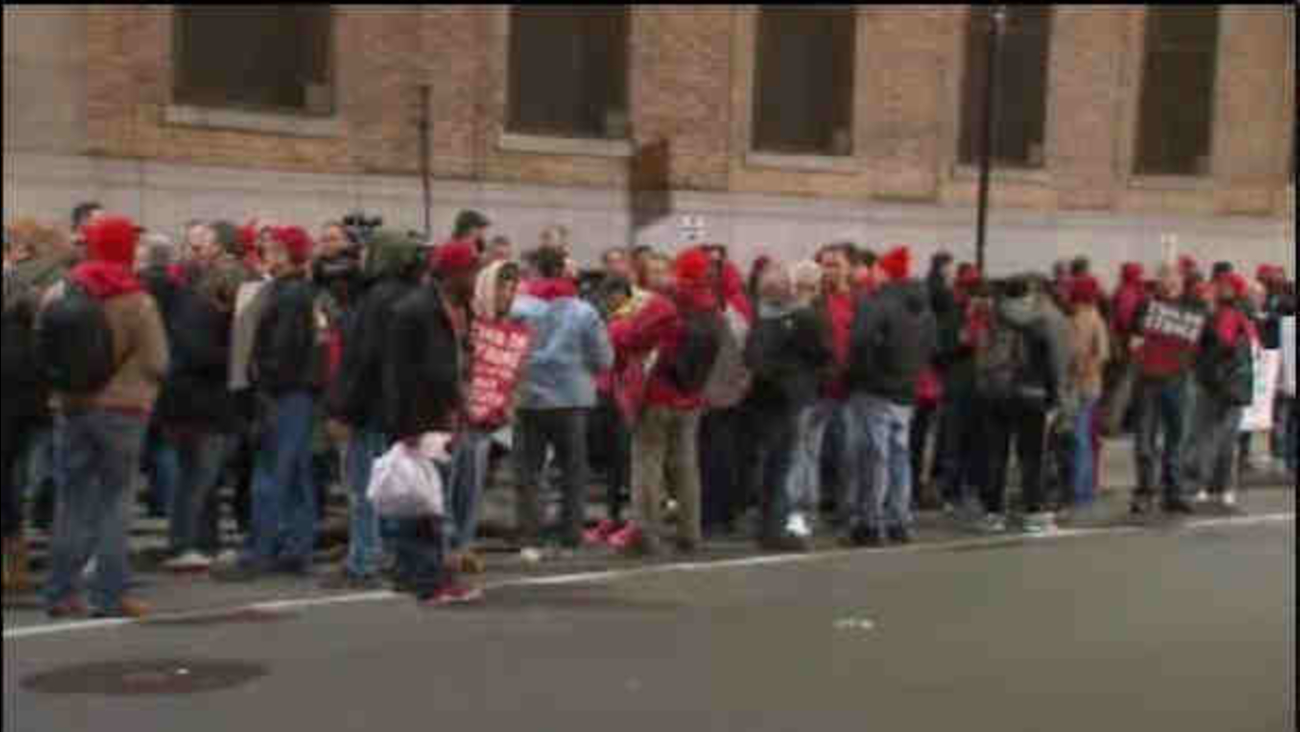 AP
NEW YORK -- About 39,000 Verizon landline and cable workers on the East Coast walked off the job Wednesday morning after little progress in negotiations since their contract expired nearly eight months ago.

"We're on strike to maintain good jobs and maintain our standard of living," said Keith Purce, president of CWA Local 1101 which represents about 3,500 workers in Manhattan and the Bronx.

Standing on a picket line in Manhattan with hundreds of union workers, Purce said they were prepared to stay out "as long as it takes."

He said talks broke off last week and no new talks were scheduled.

Verizon spokesman Rich Young said the company was very disappointed that union leadership has called a strike. He said it has trained thousands of non-union workers to fill in for striking workers and "we will be there for our customers."

Between 300 and 400 union members walked a picket line outside the company's office in downtown Albany, where workers set up an inflatable "greedy pig" and rat, said Mike Panzerino, treasurer of CWA Local 1118.

"We're tired of fighting with the company," Panzerino said. "All we're asking for is a fair contract and they don't want to give it to us."

Another inflatable rat was on display outside a Verizon office in Livingston, New Jersey, where striking workers rallied Wednesday.

In Philadelphia, about a hundred striking workers took to the streets near the company's headquarters and chanted, "Scabs, go home!" at non-union replacement workers.

The unions say Verizon wants to freeze pensions, make layoffs easier and rely more on contract workers. The telecom giant has said there are health care issues that need to be addressed for retirees and current workers because medical costs have grown and the company also wants "greater flexibility" to manage its workers.

"The company is being very stubborn about certain issues that are really important to us," said Liz Null, a computer technician picketing in midtown Manhattan. "One that's very important to me is the fact that they want to freeze our pension after 30 years of service. I just can't believe that a company would penalize an older worker like that."

Verizon also is pushing to eliminate a rule that would prevent employees from working away from home for extended periods of time. In a television ad, the unions said the company was trying to "force employees to accept a contract sending their jobs to other parts of the country and even oversees."

"The main issues are job security and that they want to move workers miles and miles away," said Isaac Collazo, a Verizon employee who has worked replacing underground cables in New York City for nearly 19 years.

"We have a clause currently that they can't just lay anyone off willy nilly and they want to get rid of that," said Collazo, a single father of three children. "I feel if the company had the opportunity, they would just lay people off."

But Young said the unions' talk about offshoring jobs and cutting jobs is "absolute nonsense."

"These contracts have provisions that were put in place decades ago. ... They need to take a look at where the business stands in 2016," he added.

Verizon said in a statement Wednesday that it "has activated its business continuity plans as customer service remains the company's top priority."

Verizon Communications Inc. has a total workforce of more than 177,000 employees. In its statement, the company said it had been willing to participate in mediation if the unions extended their strike deadline, but that the unions instead called a strike.