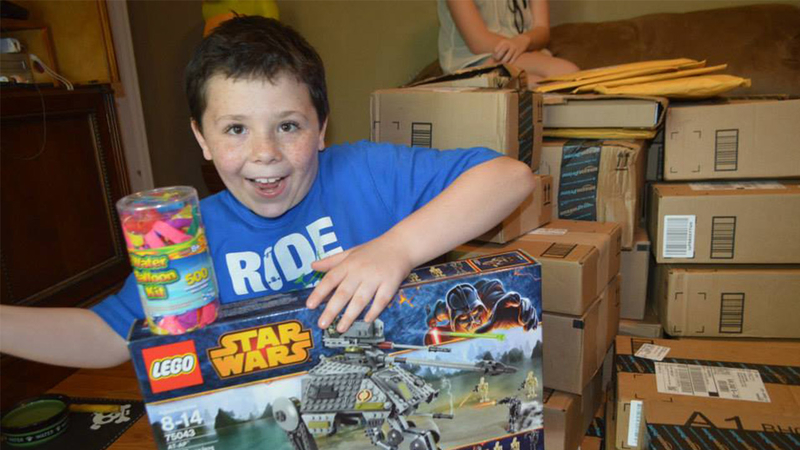 Hundreds of strangers show up to boy's birthday party

Hundreds of people turned up for a massive water balloon fight over the weekend to celebrate a little boy's 10th birthday after the boy's mother issued a heartfelt plea on Facebook.

Camden Eubank was born with a motor speech disorder known as childhood apraxia of speech (CAS), making it difficult for him to pronounce sounds, syllables and words.

"Basically it means the brain has trouble telling the mouth how to move its muscles," Traci Eubank, Camden's mother, told ABC News. "So, a 'T-H' sound comes out as an 'M' sound. He also has some coordination issues with fine motor skills like holding a pencil."

Camden is homeschooled, and his mom says he has a really hard time making friends.

Camden wanted to have a huge water balloon fight for his 10th birthday party, but he didn't have many other kids to invite.

"It's so unfair. There's just no one to invite to this party," Eubank told ABC News. "How can I have a huge water balloon party with four or five kids?"

So the Roanoke, Va. mom decided to extend an open invitation on Facebook to "anyone with kids that wants to come throw some water balloons with one awesome little boy." Eubank's efforts proved successful, and hundreds of people turned up at Troutville Park in Troutville, Va. to celebrate the birthday of a 10-year-old boy.

The party started off with the local fire department soaking all the kids with a firehouse, followed by a massive water balloon fight.


Camden and his new friends then enjoyed hot dogs and a six-tier cake modeled after the film Despicable Me.

But the birthday joy didn't end with the water balloon fight. Hundreds of people from places all across the world, including Brazil, China and Israel, sent the 10-year-old cards and gifts.

The Mattel company also sent Camden a boxful of toys in honor of his birthday.


"It was just a great party," said Camden's grandmother, Kathryn Sowers. "There was a lot of people -- about 300 to 400. He was just beside himself. He had the best time."
Related topics:
societychildren's healthchildrenparentingbirthdayfacebooksocial mediatrendingfamilyu.s. & worldgood news
Copyright © 2022 WTVD-TV. All Rights Reserved.
TOP STORIES
LIVE COVERAGE: Winter storm arrives in NC
Why do we get freezing rain instead of snow or sleet?
Hostages in N. Texas synagogue 'out alive and safe,' Gov. Abbott says
Gov. Roy Cooper warns all to prepare now for winter weather
Man shot, killed by officer at Duke University Hospital
AMBER Alert canceled for missing Durham 9-year-old boy
Tsunami advisory issued for US after volcano explosion
Show More
Netflix raises subscription prices again
N95 vs. KN95 masks: What's the difference between them?
Lee County deputy shot, expected to recover
Questions arise at vigil for man killed on I-440 by Raleigh police
Body camera footage shows moments after Jason Walker's death
More TOP STORIES News