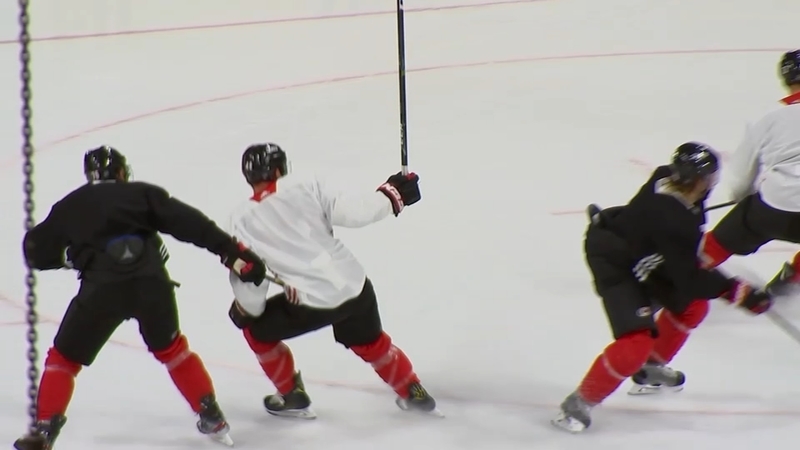 RALEIGH, N.C. (WTVD) -- First of all, don't try to tell Rod Brind'Amour that this year's Stanley Cup champion should have an asterisk next to it.

"Whoever wins is going to earn it. There's just no way around it. This is not a four or five wins and you get a championship, I mean you've got to grind this out, and then on top of it, to me, it's that fact that the sacrifice and just those added elements here. You know, being stuck in a hotel," he said.

You heard the man -- sacrifice. Hockey's all about it and this year, that takes on a whole new meaning with the bubble. Players must leave behind everything for a chance to win. Family first and foremost. Jordan Martinook got an early start on the emotional angst.

"My family didn't come back to Raleigh with me, so I've been doing this for two weeks and obviously you have your hard days that you think about it," he said. "I'm getting choked up a little bit just thinking about it but it is what it is, you know?"

Jordan Staal, father of three, including a young boy, will likely be away for some major milestones.

For Jaccob Slavin, the timing of the layoff proved more friendly when it came to his daughter.

"I was actually able to be there for her first steps," Slavin said. "It happened during quarantine and just lots of development for her, so it's been, it's been fun. Thankful for FaceTime. A lot of FaceTime. Hopefully, the hotel has good Wi-Fi."

Despite the heartache, all three said it's a price they're willing to pay. The next question is how to pass the time between games. What will they bring along to stay entertained?

"That to me is a real big concern because we don't want guys to get cabin fever," Brind'Amour said.

Martinook is already planning coping mechanisms. He's bringing his favorite board game "Super Tock." As for outside fun, "We have access to that BMO Field and stuff like that, so get outside and throw a football around, play some spike ball."

Dougie Hamilton takes things more literally. Asked if he could only bring one thing to the hub city, what would it be, he answered, "my phone."

It bears mentioning that Hamilton was not at practice Thursday after leaving Wednesday's session early and in pain. There's no word on his status other than Brind'Amour saying he is currently "unfit to play."

As for the coach, as long as he can do planks and pushups, he's probably a happy man. Brind'Amour did say he is always hunting new Netflix shows, but predictably, mostly plans to work.

"All these games that are going to be going on, I think they're at all different times of the day. I'm pretty much sure we'll be busy just watching games," he said.

Justin Williams has seen it all during his lengthy career, playoffs and otherwise, so he's not going to be fazed.