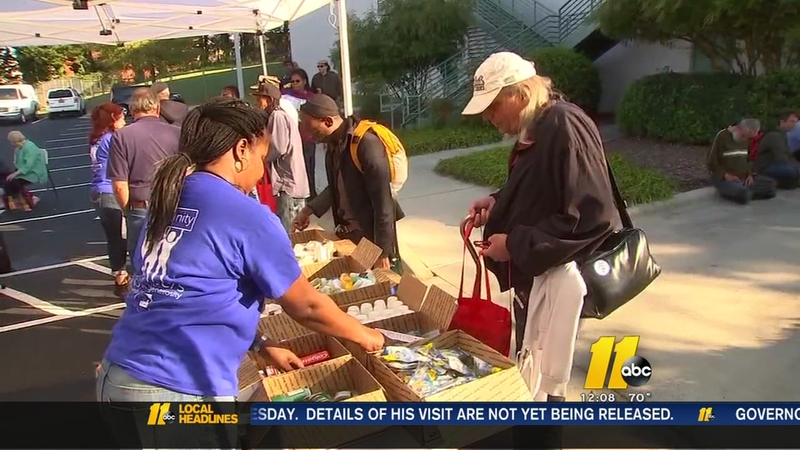 RALEIGH (WTVD) -- About 200 Veterans in need are expected to attend the 10th annual Capital Area Veterans Stand Down at the South Wilmington Street Center in Raleigh.

The shelter at the center served more than 220 homeless veterans last year.

The US Dept of Housing and Urban Development estimates there are more than 39,000 homeless veterans on any given night.

At the event, veterans are able to access information about services including housing, employment, and healthcare. Volunteers are also handing out shoes, clothing, backpacks, and more.

With his cane in hand, Vietnam veteran Clyde Cauley walked to different booths to get information and items. He lives at the center shelter.

The 61-year-old disabled Marine says he has been homeless for almost 10 years. He says circumstances led to his homelessness.

"Death in the family, not being able to afford the rent that was needed," he said.

He had been taking care of his mother when she died and he was unable to pay the rent, he said.

Cauley said he ended up moving around the country, often sleeping on the streets. He said he felt hopeless at times and battled alcoholism for more than a decade.

"We're not all bad guys because maybe we're down on our luck a little," he said. "People run into hard times."

Cauley said he hasn't had a drink in several years and came back to his hometown of Raleigh, where he found the South Wilmington Street Center. Now, he says his goal is to find low-income housing.

He said all the support at the event gives him hope he will.

"It means a lot to me," Cauley said. "It means there's a light at the end of the tunnel."